Founded in 1978, Jing Fong in Chinatown is the largest dim sum restaurant in New York City, with 20,000-square-feet of space and 800 seats.  It began at 24 Elizabeth Street with 150 seats and then in 1993 it moved to the giant space at 20 Elizabeth.  In July, Jing Fong completed its first expansion since 1993 by opening a branch on the Upper West Side.  The new location is still in soft opening mode with a reduced menu that is about a quarter of the size of one at the Chinatown location.  The other difference is that at the Upper West Side location there are no carts circulating the floor distributing dim sum, instead you order from a menu.  But the Upper West Side Jing Wong has a dim sum happy until 7pm and they are launching Saturday and Sunday brunch.

For my first visit there I wanted to go vegetarian, but it turns out that this is not Jing Fong’s strength.  They list steamed vegetable buns on the menu, which I really wanted to try, but they actually no longer serve them.

The happy hour menu has a combo dish of two Steamed Vegetable Dumplings and two How Gar, so I started there and progressively moved away from my vegetarian dinner plan.  The steamed vegetable dumplings are rice flour wrapper purses filled with a pretty bland mix of chopped vegetables.  These vegetable dumplings are best as a means of mopping up sauce.  However, the How Gar were excellent, the shrimp tasted sweet and fresh and had a juicy pop when I bit into them. 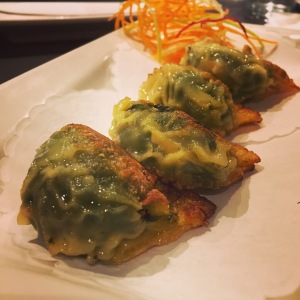 Next I tried the Crab, Shrimp and Spinach Dumplings which are open pockets made with rice flour dough wrappers stuffed with spinach and shrimp and topped with flakes of crab meat.  The same excellent shrimp that are in the How Gar went really well with the spinach in these dumplings. The flaked crab sitting on top of the filling didn’t add much flavor, but overall the flavor and texture of these dumplings said fresh and healthy.  Jing Fong does rice flour wrappers really well, at a lot of places these wrappers are gummy and chewy and yet somehow don’t hold the dumpling filling together.  But at the Jing Fong the rice flour wrappers had a slight stretch and chew with a great mouth feel and held the filling together.

The last dumplings I tried were the Fried Pork and Chive dumplings which were excellent.  These were deep fried and excellently crispy and largely packed with chives, which have a mild onion flavor.  There was just enough pork mixed in with the chives to add salty and savory flavor and silky texture to the filling. 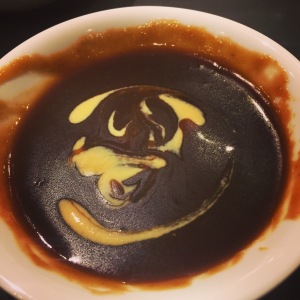 The Location:  Jing Fong is on the Upper West Side of Manhattan on Amsterdam Avenue at 78th Street.  It is in space that used to house Planet Sushi, which had an almost 20 year run slinging mid-range priced nigiri, sashimi, maki and futomaki.