The gloriously named, Flaming Kitchen, serves Szechuan style dishes in a sleek modern styled dining room on the Bowery in New York City.  In addition to its main Szechuan menu, Flaming Kitchen has a Chinese-Cajun menu that features shrimp, crawfish and crab boils with ears of corn and potatoes.  This Chinese-Cajun mash-up seems aligned with the Viet-Cajun cuisine highlighted on David Cheng’s show, Ugly Delicious, when they visited Houston.  (As an aside, Ugly Delicious is the best food-travel show I have seen recently, Cheng totally nails it.)  For $16 we got a pound of shrimp boil with corn cob pieces delivered to the table in a big plastic bag.  The presentation was not aesthetically great and it was a little messy getting the shrimp out of the bag, but they tasted amazing.  The shrimp were served shell on and head on and were quite spicy, with less salt and way more garlic than I have had in seafood boils in New Orleans. When we ordered them I imagined they would be prepared with Szechuan pepper corns, but I didn’t get any of the mouth tingle and numbing that indicates the presence of pepper corns. The best part was sucking the juice out of the shrimp heads.

The Dumplings:  Flaming Kitchen has a wide dumpling menu that includes Szechuan and Shanghaiese styles of dumplings.

Of the three plates of dumplings we tried, the Szechuan Pork Dumplings in Chili Oil were the best.  The pork dumplings were served sitting in a bowl of chili oil with a mash of Szechuan spices piled on top of the dumplings.  The pork filling was well seasoned and flavorful, with the spice heat, sweet, sour, and funky flavors of the oil and spices layered on top of the pork.  The spice level seemed to vary a lot within the mix of oil and spices, or maybe it was just as time passed the dumpling wrappers absorbed more oil. But all I know is the last couple of dumplings smacked me in the face with spice heat.  If you like this style of dumpling these were a great example. 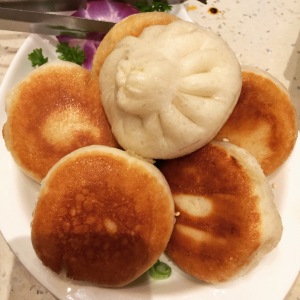 The pan fried small pork buns were seared crispy brown on the bottom which gave them a great caramelized sear flavor.  But I thought the buns were a little under stuffed with the pork filling and the ratio of fluffy bread to filling was too far in the direction of the bread.  The pork filling was also lacking in juice and so the buns were a little dry.  But overall these buns were pretty good, and they bordered on great when I used them to mop up the left over Szechuan chili oil and spice or dunked then into the Chinese-Cajun shrimp boil liquor.

The pan fried pork and cabbage dumplings were classic pot sticker style dumplings that were pan fried on the bottom and then steamed so the tops of the wrappers were cooked and soft.  Chinese pot stickers are usually a pretty robust dumpling with a coarsely ground meat and vegetable filling and a thicker wrapper, but these dumplings reminded me of the delicate gyoza often served at Japanese restaurants.  The wrappers were very thin and the filling was minced very finely.  In fact so finely that without the description on the menu I would not have known that there was cabbage in the filling.  Overall these dumplings were a little bland and I ended up dunking them into the left over Szechuan chili oil and into the shrimp boil liquor to make them flavorful bites.

The Dipping Sauce:  The buns and the pan fried dumplings were served with pretty standard Chinese soy based dipping sauces.  But the shrimp boil liquor made a really unique and kick-ass dipping sauce.  Imagine a Cajun boil liquor with Szechuan influences that has been infused with shrimp as a dipping sauce for your pork dumplings and buns.  Amazing!  The mix of the Szechuan spice mash and chili oil was also a good choice for dipping the buns in.

The Location:  Flaming Kitchen is in Manhattan’s Chinatown on the Bowery between Grand and Hester Streets on the East side of the street.  It is a five minute walk from the Grand Street B/D subway station.