Moonrise Izakaya is a new “Japanese Pub” on the Upper-West Side that is trying too hard on the aesthetics and décor and not paying enough attention to the food.   The interior and exterior were painted in an anime style by the Japanese graffiti artist Shiro and inside, many of the surfaces that aren’t sprayed painted are covered with pop stickers.  The stickers on pillars and tables are layered to give the impression they organically accreted over time, like the show flyers on the walls of CBGBs, but they were actually slapped onto the walls just two weeks ago.  The overall affect was distracting and had me thinking that there must be some online store that will drop-ship a pallet of Mc-Japanese, generic anime-ish stickers.  Up-front there is coat room/DJ booth that was pumping out the worst of 80’s pop music.

The chef who designed the menu is Korean so the Pancake with Shrimp and Squid is not Okonomiyaki but instead is a Korean Haemul Pajeon.  The Pork Tonkatsu with Curry was related to the actual Japanese dish in name only.  Pork Tonkatsu is a lean pork cutlet that has been breaded in Panko, deep fried and then sliced into strips.   Moonrise Izakaya’s version was big chunks of fatty mystery meat that had been dipped into batter and then deep fried.  The taste was mainly of fry oil and I left two of the chunks on my plate because they were too fatty and gristly.

Unless it steps up its game a lot, Moonrise Izakaya will not present any competition to the nearby Yakitori Sun Chan or Naruto Ramen.  The most interesting thing about this place was Shiro’s spray painted exterior and the Sailor Moon mural in the bathroom.

The Dumplings:  Moonrise Izakaya serves pork gyoza, vegetable gyoza, shrimp shumai and pork buns.  I tried the vegetable gyoza, which were the run of the mill green colored wrapper gyoza that you find at any low- to mid-tier sushi bar or ramen bar.  Inexplicably the gyoza looked like they had been cooked by crushing them in a panini press, it was weird, visually unappealing and not very tasty.  I also tried the shrimp shumai, which, similar to the gyoza, were frozen generic mini-shumai; they tasted fine, but were nothing special. The shumai were served as a jumbled pile in a bamboo steamer, like someone had shaken the steamer before bringing it to the table.

Sorry the photos are pretty bad, but it is quite dark inside the restaurant.

Location:  Moonrise Izakaya is on the corner of 98th street and Amsterdam in the Manhattan Valley neighborhood.  If you are looking for Japanese Izakaya food in that neighborhood head over instead to Yakitori Sun Chan on Broadway between 103rd and 104th. 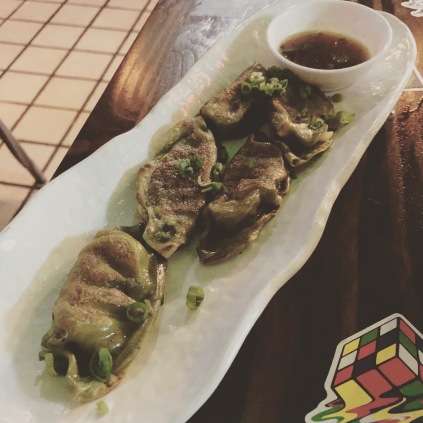 Another shot trying to depict the overall unappealing-ness of the gyoza.