After having been blown away by Nishida Sho-Ten, I decided to try all the ramen joints in the Ramen Joe family – Naruto with four locations, Terakawa Ramen and Nishida Sho-Ten.  The Naruto Ramen location on the Upper West Side has a couple of tables and a small ramen bar that seats about eight people.  The wall across from the ramen bar has an odd mural of a Japanese school girl dodging flying slices of fish cake like Keanu Reeves dodging bullets in the Matrix.  Also, in what seems to be a feature of Ramen Joe restaurants, the bathroom has a super high-tech Toto toilet. 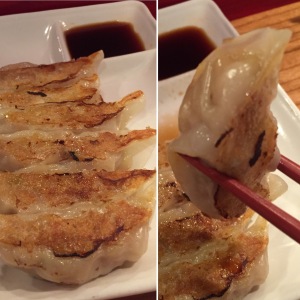 The Dumplings:  The pork gyoza were good but not as good as those at Nishida Sho-Ten which cooks their dumplings into a sheet of fried batter.  Naruto goes with a more traditional style of gyoza, six dumplings tightly packed together on a flat top and fried so they are stuck together when served.  If you sit at the ramen bar the dumplings are cooked in front of you on a flat top behind the bar. They fry the bottoms of the gyoza for about five minutes and then finish them off by covering them with a pan lid so they steam.  The pork filling was medium ground and had a good mouth feel that was slightly chewy and had a great porky savory flavor.

The Dipping Sauce:  The dipping sauce was the basic mix of soy and vinegar, but was really too salty.

The Location:  I tried the location on Broadway at 100th street, just about where the Upper West Side ends and the Manhattan Valley neighborhood begins.  There are Naruto locations on East 31st Street between Lexington and Park Avenue (this is the Express location), on 3rd Avenue between 89th and 90th Streets on the Upper East Side, and on 5th Avenue between 4th Avenue and Garfield Pl in Brooklyn’s Park Slope neighborhood.