I went to a large group lunch at Jane G’s Dim Sum House where many dishes were ordered.  I didn’t get to try all the dishes that came to our tables, so this review will be just a sample of what we were served.   Jane G’s is on the second floor of an apartment building and has a bar/lounge with street views and a pool table, two dining rooms and a private dining space. 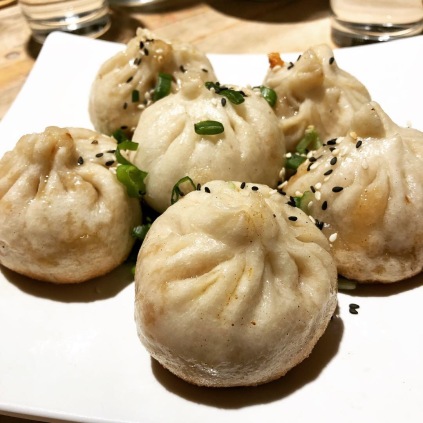 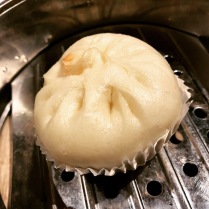 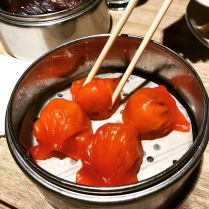 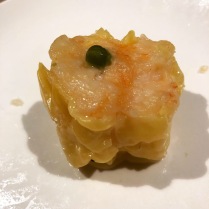 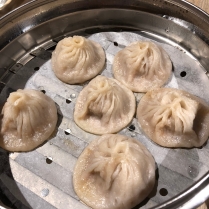 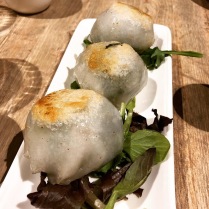 We got all four soup dumpling options on the menu, Pork, Pork and Crab and Spicy Pork Xiao Long Bao and the Fried Soup Dumplings (Sheng Jian Bao).  My overall critique is that the Xiao Long Bao were both overcooked, the wrappers of several dumplings in each basket had ruptured and lost their soup, and then had been allowed to sit too long before they were brought to our table, so that the dumplings had cooled and the wrappers had become rubbery.  The flavor of the soup and meat was really good and the spicy ones kicked my ass, but the dumplings suffered from poor execution and service.  The Sheng Jian Bao were also really tasty but had also been allowed to cool and didn’t contain any liquid soup; I assume the soup had all been absorbed by the dough wrapper.   It is clear from the Xiao Long Bao and Sheng Jian Bao that Jane G’s knows how to source and season tasty pork for their dumplings, but they need to work on their cooking and food running technique.

The Shrimp Shu Mai were large and packed with coarsely chopped, exquisitely fresh tasting shrimp.  These were probably the best of the dumplings we had and I wish we had ordered more of them.  The BBQ Pork Buns were also standouts.  Generally I avoid the BBQ Pork Buns at dim sum, they are usually so large they fill me up, but these were small, golf ball sized buns, filled with deliciously seasoned, sweet Chinese BBQ Pork.  These were some of the best BBQ Pork Buns I have had in a long time.

Location:  Jane G’s Dim Sum House is in Philadelphia’s University City neighborhood, near Drexel University and the University of Pennsylvania. It is on Chestnut street between South 39th and South 40th streets.