I just returned from a mini-tour of vegan Asian restaurants in San Francisco and the overall best, top pick was Golden Era which serves Vietnamese, Indian, Thai and Chinese dishes.  Golden Era is a brightly lit, low on decor spot near the Civic Center that serves fabulous food and is packed during lunch.  The Vietnamese crepe with vegan shrimp was delicious, it was packed high with bean sprouts and slices of mock shrimp that were quite convincing. The fresh rice paper wrapped spring rolls filled with lettuce, mint leaves, cilantro, and seasoned tofu were also really good. 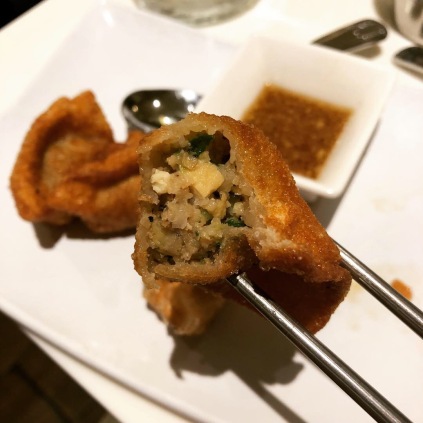 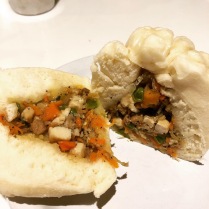 The Dumplings:  Golden Era’s pot stickers are not actually prepared pot sticker style but instead are deep fried.  I really enjoyed these dumplings which are filled with tofu, textured soy protein, cabbage, jicama, spinach, and ginger. They have a thick wrapper and the ones we were served were fried to an almost dark brown color so the wrapper, ironically, took on the crispy, crunchy texture of Chicharrones.  These are a fake meat style veggie dumpling and the textured soy protein provided a good facsimile of ground pork and they had a mild savory, meaty flavor.

The Golden Era menu does not list steamed buns, but I noticed they had large, navel orange sized buns sitting at the counter.  The white fluffy Chinese bread of the bun was a little dry, but the filling of these buns was excellent, so tasty.  The filling includes seasoned texture soy, which gives it a meaty texture, tofu, carrots, green peas and vermicelli noodles.  The buns are large enough that two people can split one as an appetizer.  If you go to Golden Era look to see if the buns are available at the counter.

The Dipping Sauce:  The pot stickers come with a soy dipping sauce that was packed with ginger flavor and was an bright, tasty accompaniment for the dumplings and the buns.

The Location:  Golden Era is in the Civic Center neighborhood on the edge of the Tenderloin.  It is on Golden Gate Ave between Larkin and Hyde streets.