The mom, pop and son restaurant Shanghai Restaurant pioneered Chinese food in the late 90’s in Mexico’s Playa Del Carmen.  The food is essentially mom’s home cooking with dad cranking out dumpling wrappers and noodles on an old school hand cranked pasta maker; it appears that they make everything from scratch.  Shanghai Restaurant is a tiny place with seating for about 12 and a hot counter that runs during lunch.  It was the “Special Home Made Noodle” sign in the window that convinced me to give it a try and it turned out the vegetable chow mein, the fish with garlic sauce and the dumplings were outstanding.  Oddly enough they also seem to sell hats, they have a display of them just inside the door.  Between the home cooked feel of the place, the really friendly owners and the excellent food, I expect that this will be one of my top picks for 2016. 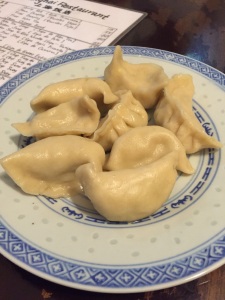 The Dumplings:  The menu lists steamed and fried dumplings as the two dumpling options.  All of the dumplings are made fresh, so you just tell the waitress, who is also the cook, what you want in the dumplings, how you want them cooked and they are prepared immediately.  We got the steamed vegetable dumplings and the fried pork dumplings, both of which were excellent.

The dumplings are made behind the counter and as soon as you place your order you can see the dough being run through the pasta maker to make thin sheets and then the sheets are cut into round wrappers.  The cook then fills the wrappers and hand crimps them shut with amazing uniformity, each dumpling seems to have the exact same number of pleats.  Having the noodle and dumpling making station right behind the counter and visible to the customer really exemplifies the fresh home cooked ethos of Shanghai Restaurant.

The vegetable dumplings are filled with cabbage, carrots and onions that are lighlty sauted before being wrapped.  I thought these dumplings were excellent, they were savory with a mild cruciferous flavor from the cabbage and a sweetness from the carrots and onion.  The vegetable dumplings are vegan.  The fried pork dumplings are pan fried on the bottom and steamed on top gyoza style and are filled with minced pork and a small amount of cabbage.  Mexico has some good pork and it showed in these dumplings, the filling was savory and sweet pork goodness.  The thickness and texture of the wrappers was perfect, not too thick and doughy, but strong enough to hold together and they got crispy after what seemed like a pretty light pan frying.

The Dipping Sauce:  Shanghai Restaurant makes its own spicy strong Habanero sauce which is served with the dumplings along with a more traditional bowl of soy and rice vinegar.  They started making the Habanero sauce because the local taxi drivers complained that the traditional Chinese chili sauce was not spicy enough.  The Habanero sauce on the pork dumplings made this a fusion dish that totally worked and the addition of a little of the soy and vinegar sauce took it to 11.

The Location:   You can find Shanghai Restaurant on 10th Avenue which is one block further back from the beach than the main party drag of 5th avenue.  Look for it on the west side of 10th Avenue between 20th and 21st street.