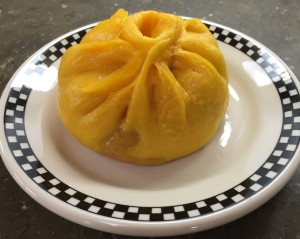 The steamed bun take-out kiosk at Food Gallery 32 (on 32nd Street in New York’s Korea Town) started life as Bunch, then added Gua Bao to the menu and renamed itself Bunn and then recently expanded to add Taiyaki (a fish shaped pastry filled with red beans or custard) to the menu and became Mama.  Throughout the evolution they have served large, fist sized steamed buns from their open kitchen/steam room.  They serve five or six different buns and the kimchi and sweet potato buns are both vegan.

If you get the kimchi bun, you better like kimchi, the buns are large and packed with a lot of nappa kimchi and some glass noodles. They use a good, spicy kimchi and the bun dough wrapper is light and fluffy.  So it is a good bun but it is a lot of kimchi, I preferred the bacon and kimchi bun (the bacon cuts the kimchi) and the spicy pork bun.  Be careful eating these buns they are piping hot when they come out of the steamer.

This entry was posted in Buns, Kimchi, Vegan, Vegetarian. Bookmark the permalink.

1 Response to Bunn Reborn as Mama