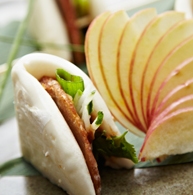 While its feet are firmly planted in Korea, Franchia is really a pan-asian restaurant with Chinese and Japanese sections of the menu. It also has an asian tapas menu on which the”Vegan ‘lobster’ ball stick” and “Vegetables dim sum buns” really stand out, and a must try item on the lunch menu is the “Peking Buns – Steamed buns stuffed with crispy vegetarian ‘duck’ and scallions” (photo to left). The food here is really good, and while it is all vegan, I don’t think meat eaters will feel like they are missing anything. The restaurant has a terraced design with three levels, reminiscent of a rice paddy, with a much higher end design than the dumpling houses usually reviewed here. Similarly, the chefs prepare food that is ornately presented and designed, this would be a good date spot.

The Dumplings – Franchia serves kale, kimchi, mixed vegetable and soy and grain meat dumplings. The kale dumplings include a small amount of tofu in the filling and are delicious; these dumpling alone make Franchia worth returning to. The kimchi dumplings are also great, with a good amount of spice. The fake meat dumplings do a fairly good job of recreating a minced beef dumpling, the texture is very close to the real thing and there is a good savory meaty flavor. The mixed vegetable dumplings are lack-luster. It appears Franchia rolls its own dumpling wrapper dough and the dumpling are simply pressed close with no crimping.

The Dipping Sauce – The dipping sauce is a spicy, orange-red creamy sauce.

Location – Franchia is located in Murry Hill, on Park ave between 34th and 35th streets. This area is a bit of no man’s land and not really convenient to any subway line. Take the B, D, R line to Herald Square and walk East on 32nd street.