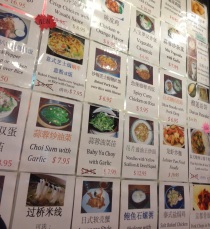 XO Kitchen mainly serves dim sum style small plates and has a huge menu supplemented by at least two other specials menus and by specials and additions listed on pieces of paper taped to the walls. The menu ranges from American-Chinese dishes, which generally they don’t do well, to traditional Chinese dishes, to Japanese dishes, to some funky stuff – braised pickled pigs knuckles. While there are a few misses there is a lot of good food to try here.

The Dumplings. The main menu has at least half a dozen dumplings to choose from and there are more options listed on the wall.

Snow peas leaf steamed dumpling – the filling is made of the stem and leaves of the snow pea plant and at least two types of mushrooms, all of which is contained in a crystal wrapper. The greens are really tender but overall the dumplings are a little bitter and not as good as the pea green dumplings at AmChi. 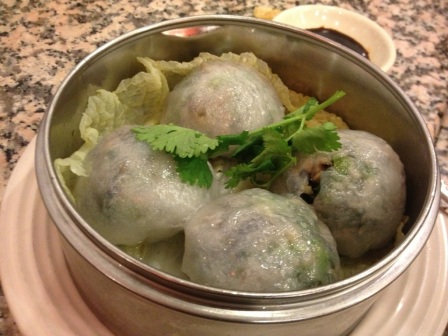 Fried fresh water eel dumplings – the eel is sweet with a mild eel flavor, not overly fishy. The eel is folded into a square wonton wrapper and deep fried so it comes out crab rangoon style. The crispiness of the fried wonton is a great contrast to the soft eel meat.   They are served with a Chinese mustard sauce dribbled over them.

Fried pork shrimp – these dumplings have a thin wrapper and come perfectly crispy fried. The filling is about a 50:50 mix of pork and shrimp with some scallion mixed in, overall very tasty.

Fried mini bun – there was a total miss-communication on these, we thought we were told by the waiter that these were meat filled buns (bao) and would take 20 minutes to prepare.  It turns out they take about 5 minutes to come out from the kitchen and are actually a sweet desert bun served with a side of cream sauce.