This outing to Dumpling House started as my second attempt to eat at Din Tai Fung, this time in Arcadia outside of LA.  We pulled into Din Tai Fung at 1:30 on a Sunday which seems to pretty much be prime time. We were told it would be at least an hour wait for a table for two.  So instead we headed down the street to Dumpling House, which I spotted on our way over to Din Tai Fung; I think this spot gets a lot of overflow business during rush at Din Tai Fung.  Overall I think this spot was decent and when you are hungry eating here beats waiting an hour or more for a table down the street. 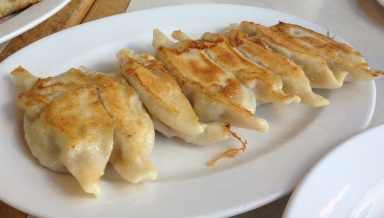 The Dumplings.  Dumpling House has about 12 varieties of dumplings which you order dim sum style by putting check marks on an order card.  It also has a menu of entrees and lunch specials.

Crab soup dumpling –  it seemed like there was the bare minimum of crab meat mixed into the pork in these dumplings to justify the name and any crab flavor that might have been imparted was overwhelmed by the ginger in the filling.  The wrapper was overly thick and got a little chewy as the dumplings cooled.  They also lacked the little dollop of crab roe that is usually perched on top of crab soup dumplings.

Lamb cabbage – These boiled dumplings were excellent, they had a mild lamb flavor that was not at all gamey and were so juicy they were basically soup dumplings.  The lamb filling was flecked with chopped scallions, but I didn’t notice any cabbage in the filling. 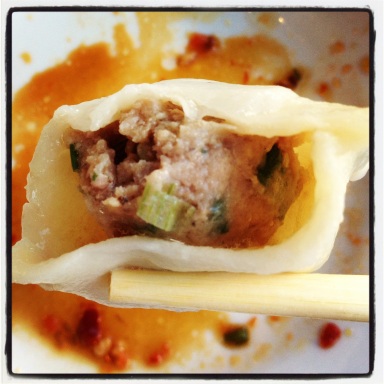 Fried dumpling – These were gyoza style, pot sticker dumplings, so the wrapper was crispy on the bottom from frying and steam cooked and supple on the top.  The pork filling was super tasty and very juicy, but the dumplings overall were a little greasy.  The dumplings were served clumped together on the plate (see picture above) and tended to stick together and when we tried to peel them apart from each other the wrappers would tear.

Smoked pork pancake – Obviously not a dumpling but this dish was so good it is worth writing about.  Essentially this dish was a wrap, which usually I think is a culinary crime (the best part of the Prisoner TV show remake was it’s mocking of wraps).  But this was something else altogether, they serve a Japati style pancake wrapped around thin sliced smoked pork, lots of chopped scallions and some cilantro sprigs.  Totally delicious.

Dipping Sauce  There are bottles of soy sauce and black vinegar, and tubs of chili oil and Sriracha on each table. Use these fixings to mix your own sauce.

Location  Dumpling House is in a town called Arcadia just outside of Los Angeles.  It is conveniently located just down the street from Din Tai Fung.