Housed in a basement storefront, Tipsy Shanghai is a quiet, classically decorated, oasis on New York University’s bustling campus.  The restaurant’s sign says “Since 1905”, suggesting that it has been in business for over 100 years, but I can find little to nothing about the restaurant online.

The Dumpling:   Tipsy Shanghai’s menu includes pork soup dumplings, crab soup dumplings, Sheng Jian Bao, pan-fried pork dumplings, and pork wontons.  The Sheng Jian Bao – pan-fried soup dumplings – are my favorite style of dumpling and these were the best I have tried in the U.S.  The key element that distinguishes these bao from the rest is that they had lots of liquid soup inside of them.  In my experience eating these in the U.S. the soup is either missing or has been absorbed into the bun wrapper by the time the buns are served.  But the ones at Tipsy Shanghai each had a Chinese soup spoon and more of delicious, slightly sweet, ginger pork soup in each bun.  The buns themselves were light and fluffy and only a couple of millimeters thick around the pork filling.  The bottoms of the buns were perfectly browned/blackened which gives the burns a slight caramelized flavor. 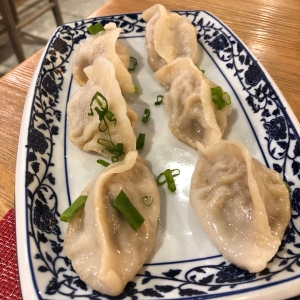 I also tried the pan-fried pork dumplings, which were also really tasty and juicy.  It is best to approach these dumplings like soup dumplings; if you just bite down into them juice will explode out, instead bite a small whole in the wrapper and suck the juice out before biting down.  While the dumplings tasted great, they were very under fried, the bottoms of the dumplings were were only slightly golden and not crispy.  They could have used another couple of minutes being seared on the fry pan.

The Location:  Tipsy Shanghai is on Thompson Street between 3rd street and Bleecker street, just below Washington Square Park.  This is part of NYU’s Greenwich Village college campus.