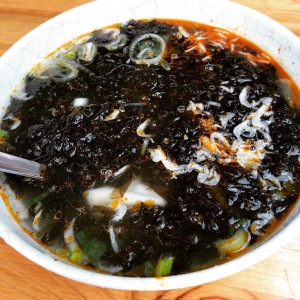 Pork Dumplings in spicy and sour soup., with lots of seaweed floating on the top of the soup.

Northwestern Chinese Xi’an style restaurants and food trucks are widely available in NYC, in a large part due to the excellent Xi’an Famous Foods, but there seem to be very few Xi’an style restaurants in London. One that I did find was Murger Han near Euston station, which has a sister restaurant, Murger HanHan in Mayfair.  The restaurant is named for Roujiamo sandwiches, the popular street food from the Shaanxi Province.  Roujiamo are usually described as the Chinese equivalent of the Western sandwich, but given that the baijimo bread originated in the Qin dynasty (221-206 BC) and the meat filling in the Zhou dynasty (1045-256 BC), the roujiamo is probably the ur sandwich.  Baijimo is reminiscent of a toasted English muffin and is made of a wheat flour dough with yeast and is traditionally baked in a clay oven.  The meat filling is pork, beef or lamb which has been stewed for hours with spices and seasonings and is chopped up before being put inside the bread.

Murger Han is a pretty small restaurant that probably seats 20 people.  The wait staff were very quick to take our order, and my friend’s cold noodles arrived right away, but my dumplings took a painfully long time to arrive.

The Dumplings:  Xi’an cuisine is known for its variety of noodles, but dumplings served in soup are also popular.  Murger Han has only one dumpling offering, pork dumplings in spicy and sour soup. The soup was quite spicy but didn’t have much of the sour vinegar flavor that Xi’an soups are known for and lacked the complexity and punch of the soup at Xi’an Famous Foods. The dumplings were well seasoned and quite flavorful, and the dough wrapper was perfectly thick enough to absorb some flavor from the soup without getting water logged. Despite Shaanxi Province being pretty far from the ocean, the soup had lots of seaweed (that is the black you see in the photo) and dried tiny shrimp in it.  I think the intent of these elements was to add umami to the soup, but they really needed to focus on bringing more sour to the mix.

Given the paucity of restaurants in London serving Xi’an style food, Murger Han is a good place to go to if you are craving this style of food, but I don’t think it is on par with the options in NYC.

The Location:  Murger Han is alongside the Euston tube and rail station on Eversholt Street near University College London (aka UCL).  It is pretty convenient to get to from anywhere in Central London.

This entry was posted in Pork, Shrimp, Soup, Wontons. Bookmark the permalink.