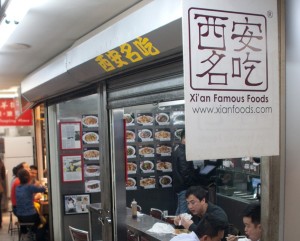 I really like the boiled lamb dumplings that are indigenous to western China and the city of Xi’an. New York’s Xi’an Famous Foods chain-lette got its start as a ten seat noodle bar in the Golden Shopping Mall basement food court in Flushing Queens that in 2006 caught the attention of Anthony Bourdain.  With a newly minted business degree the owner’s son, Jason Wang, jumped into the business to help handle the Bourdain inspired flood of customers and saw the potential for expanding Xi’an across NYC. Now there are two locations in Queens, four in Manhattan and one in Brooklyn. I have stopped by the East Village and the Upper West side locations and they are both small, close to being hole in the wall joints, that seat maybe a dozen people. Since Boudain, a parade of TV foodies have stopped in to try the hand pulled noodles, including Andrew Zimmern, Adam Richman and Bobby Flay. 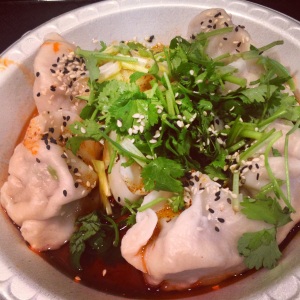 The Dumplings: boiled lamb dumplings are the specialty of the city of Xi’an, and of course this is the style of dumpling featured at Xi’an Famous Foods. They also serve spinach dumpling, which contain eggs, so these are vegetarian but not vegan. Both styles of dumplings come in a spicy and sour sauce or a spicy broth soup. It is important to know that the Flushing Queens and midtown Manhattan outlets do not sell dumplings.

I tried the boiled lamb dumplings in spicy and sour sauce, which were excellent. The Dumplings came piled high with chopped scallions, slivered cucumbers, cilantro leaves and stems and black and white sesame seeds. The lamb filling was chewy and meaty without being gamey or muttony; it seems they are using a good cut of lamb to make these dumplings.

Oddly both the lamb and the spinach dumplings are labeled with a note on the menu that said they contain walnuts. I am not really sure what walnuts added to the lamb dumplings.

The Dipping Sauce: the lamb and the spinach dumplings come doused with hot and sour sauce. I found the sauce to be very similar in flavor to hot and sour soup broth and I definitely had a tingling tongue and lips by the end of my six dumplings. You can ask them to crank up the heat on the sauce, but I imagine that any hotter would kick my ass.

Location: normally I like to try the original location of a restaurant chain but the Flushing Queens location does not sell dumplings. I tried the Upper Westside/Manhattan Valley location which seats probably 15 people, tops. It is on Broadway between 102nd and 103rd streets.

This entry was posted in Boiled, Chinese, Lamb, Vegetarian. Bookmark the permalink.