Han Dynasty is a mini-chain of Szechuan restaurants based in Philadelphia that has two outposts in Manhattan.  The first location opened in the East Village to multiple good reviews, as did the second on the Upper West Side.  But after trying the Upper West Side location I think Pete Wells’ NYTimes review of the East Village location nails it, he wrote “I’m mystified by the popularity of Han Dynasty in Manhattan, where there are far better Sichuan restaurants. Han Dynasty’s translation of the cuisine has a thick American accent.”

The Upper West Side location looks great, it has a good lounge and bar area and a large dining room with high ceilings and sky lights, but unfortunately the food was weak.  The fried rice dish I had was essentially unseasoned white rice with cubed pieces of carrots, green peas and scrambled eggs.  Han Dynasty’s Lo Mein would have been bland except for the all the salt they used, my local corner Chinese take-out makes better Lo Mein at half the price.  But it does amuse me that their web address, handynasty.net, sounds not safe for work. 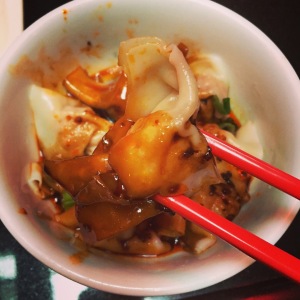 The Dumplings:  Han Dynasty’s menu includes Dumplings in Chili Oil, Wontons in Chili Oil, Chicken Dumplings and Vegetable Dumplings.  The Han Dynasty menu provides spiciness gradings for the dishes from 1 to 10, the Dumplings in Chili Oil are rated a 4 and the Wontons in Chili Oil are rated a 6.  Other than the difference in spice level, the waiter described the difference in the wontons and dumplings as the wrappers of the dumplings are 4 times thicker than the wrappers of the wontons, he was very precise about this.  The Wontons in Chili Oil looked really good but other than a striking, almost painful level of spice heat, these pork wontons and their sauce had no flavor.  My dining companion asked that the heat on the level 4 Dumplings with Chili Oil be dialed back a bit, which revealed a bitter burnt flavor in the sauce. Maybe the toasting of the sesame oil went too far.

The Location:  The Upper West Side location of Han Dynasty is on 85th Street between Broadway and Amsterdam Avenue.  As an alternative, really good dumplings can be found at Jing Fong 6 blocks south and excellent Szechuan food can be found at multiple restaurants 20 blocks north (see Grain House and Happy Hunan Hot Pot).