Last month the weird and excellent Coffee Break (aka Ten Ming Gong Zhe) closed and was replaced by an outpost of Queens’ Grain House.  Coffee Break served some of the best Sheng Jian Bao in the City and also had a spectacular Chinese sausage and cabbage fried rice.  But with the transition of Coffee Break to Grain House, the Upper West Side of Manhattan has gained some excellent Szechuan food.  The owner got his start operating a take-out restaurant catering to international students from China attending SUNY Stony Brook.  The take-out business did well enough that he brought on another chef from China and opened a full restaurant in Queens serving the Chinese immigrant community.  They decided to expand to the area just south of Columbia University because so many Columbia international students were traveling to eat at their restaurant in Queens. 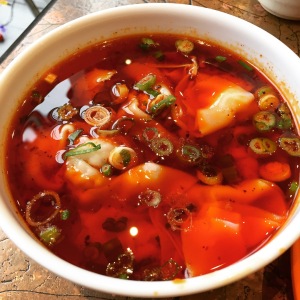 The menu has a few American-Chinese dishes (see Sesame Chicken and General Tso’s Chicken), but also has a lot of traditional and regional Chinese dishes, doubtlessly for the international students.  I tried the Hot Spicy Jumbo Shrimp with Red Pepper, which were actually medium size shrimp served on an intimidating bed of red chili peppers with slices of garlic, onion, red and green bell peppers mixed in.  The shrimp tasted amazing with a complex flavor from the onion and garlic and I suspect cumin, and had a ton of spice that made my face sweat. 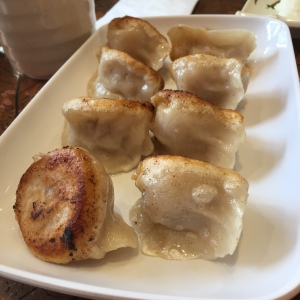 Pot Stickers – Grain House’s Pot Stickers are a pork dumpling that is first steamed and then pan fried on the bottom side. These dumplings were really juicy and tend to explode when you bite into them, I managed to spray my shirt sleeve with juice.  So treat these pot stickers like soup dumplings, bite a small hole in the wrapper and slurp the tasty juice out before you fully bite into the dumpling.  The filling had a really good salty, savory pork flavor. 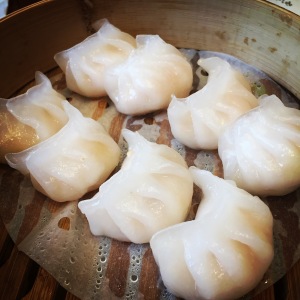 Crystal Shrimp Dumplings – as much as I enjoyed the Pot Stickers, the Crystal Shrimp dumplings were a disappointment.  The wrappers were well done – translucent, sticky, stretchy and slightly sweet – but the shrimp were flavorless.  Thankfully the shrimp and wrapper were absorbent so they served as a good sauce delivery vehicle. 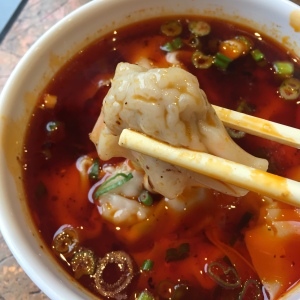 Spicy and Numbing Pork Wonton – This wonton in red oil dish is served in a deep bowl with the wontons laying just below the surface of impressively/intimidatingly volcanic looking red chili oil.  When the waiter puts this dish in front of you it is like looking down into the lava filled crater at the top of Mount Doom in Mordor.  The wonton skins hugged the pork filling, forming crinkly, cauliflower head like shapes with lots of surface area for the sauce to cling to.  The filling was well seasoned and tasty but after one or two of these wontons all I could feel was spice heat.  This is a dish that fights back, but you keep wanting to go back for another sweaty round.  Based on the name of the dish I was expecting the oil to be seasoned with tingle and numbness inducing Szechuan pepper corns, which are usually used in Szechuan cuisine to balance out the spice.  But these pepper corns were not noticeably present in the bowl I was given.  Despite the lack of “numbing” this was a great bowl of wontons.

The Location:  Grain House is on Amsterdam Avenue between 105th and 106th street.  This area is experiencing a Chinese restaurant renaissance fueled by the international students at Columbia. Grain House only seats about 20 people, so if it is packed, as it was the last two times I tried to go, there are plenty of great options nearby (Happy Hunan Hotpot, Xi’an Famous Foods, Lava Kitchen, and see this map of all the nearby dumpling spots).