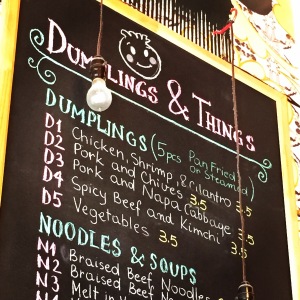 The menu board at Dumplings & Things

I have been eating a lot of vegetarian dumplings lately and felt like re-embracing the pork.  The guys from East Wind Snack Shop have been messaging me through Instagram to come check out their place and based on their Instagram feed they look like they serve some good pork belly.  So last weekend I made the trek to Windsor Terrace, Brooklyn to try their dumplings and buns only to discover they were on vacation for a week – “Gone Fishing” was the official sign on the door.  A quick Google search later and I was on my way to Dumplings & Things in Park Slope.

Dumplings & Things is a tiny, high ceiling-ed, raw brick walled place that has room to sit six at a communal table and three at a counter, and maybe host two more standing at another small counter.  The menu is posted on a tall chalk board; check carefully because the best dumpling option, the Wontons in Hot Oil, is tucked away in the “Sides” section of the menu.  In fact, a couple who seemed like regulars spotted my plate of wontons and asked me where the hell were they hidden on the menu.

The Dumplings:  Dumpling & Things sells five types of dumplings that you can get pan-fried or steamed, that all come five to an order, the choices are: Chicken, Shrimp & Cilantro; Pork And Chives; Pork And Napa Cabbage; Spicy Beef And Kimchi; and Vegetables.  I went for the pan-fried Pork and Napa Cabbage dumplings and the Wontons in Hot Oil.

Pan-Fried Pork and Napa Cabbage –  Dumplings & Things serves a big fat, stuffed with filling, Pork and Napa dumpling; five of these is a solid lunch. The pork was sweet, juicy and well seasoned, but I could still taste the reassuring cruciferous tinge of the Napa that let me tell myself these dumplings had some redeeming micro-nutrient value.  My order was pretty aggressively pan-fried, not just fried on the bottom gyoza style, but crispy fried on all surfaces like they had actually been deep-fried.

Pan-fried Pork and Napa Dumplings and Wontons with Hot Oil

Wontons in Hot Oil – These were the show stopper that took this outing to eleven.  The wontons are stuffed with pork and Dumplings & Things takes an unconventional approach to wrapping the filling.  It is hard to explain, but it looked like the wrapper was draped over the ball of pork and then pinched closed.  In the pictures you can see that the wontons look like jelly fish or maybe like a long stalked mushroom.  Because the wrapper was bunched around the pork, it had a chewier texture than a typical slippery wonton wrapper that I usually slurp down without tasting.  Also, because of its more substantial form, the wrapper picked up a lot of the sauce which is really where the action was.  The hot oil sauce was moderately spicy and had a wide complex flavor that I couldn’t fully place, but I think fermented black beans were part of the mix.  This was one of the best Wontons in Hot Oil I have tried and I ended up sopping up the remaining Hot Oil sauce with the pan-fried pork dumplings.

Dipping Sauce:  The communal table hosts a yellow mustard squeeze bottle of soy sauce, some Huy Fong sriracha and big bottle of Chinese black vinegar.  I find black vinegar to be over-powering, so there wasn’t much I could do to dress up the plain soy sauce in the squeeze bottle.  Luckily the Hot Oil sauce was so good I used it for everything.

The Location:  Dumplings & Things is on 5th avenue between 5th and 6th street in Brooklyn’s Park Slope neighborhood.  When I lived near there back in ’91, 5th ave was a dangerous street with little commercial activity to draw foot traffic.  These days it is pretty hopping with bars and restaurants.