The co-owners of Canteen 82 hail from Malaysia and Hong Kong and the chef is from Shanghai, perhaps explaining the Asian-Fusion menu hidden behind the restaurant’s sub-title “Taste of Shanghai”.  The menu includes lots of American-Chinese dishes, Sushi, cooked Japanese dishes, a few Thai options, a hand full of Shanghaiese dishes and a large selection of dumplings.  They also have a decent set of vegan options.

The Dumplings:  The dumplings at Canteen 82 are all in-house, home made and include Bao, Xiao Long Bao and Jiao Zhi.  The web-site also has pictures of Sheng Jian and some prior articles gave these dumplings strong reviews, but they have since been removed from the menu – apparently demand was low. I tried the crab and pork Xiao Long Bao, the Peking Duck Bao and the Shangdong Dumplings. 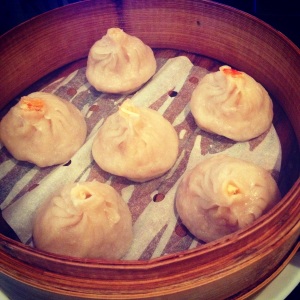 Pork and Crab Xiao Long Bao – Prior reviews have raved about Canteen 82’s Xiao Long Bao, proclaiming them some of the best in NYC.  Maybe they have gone down hill since that review was written, bu these were definitely not the among the best soup dumplings  in NYC.  The dumplings contained copious amounts of fatty, tasty pork and crab broth soup and the meat filling was savory and slightly sweet from the crab meat.  The downfall of these dumplings was the wrappers which were thick, slightly gummy and sticky and sort of a dull grey in color. The dumplings I was served were very different from the ones depicted on the web site.

Peking Duck Bao – The Bao are large and fluffy and come three to an order.  The bread of the buns was light and fluffy and slightly sweet and really well crafted.  But I don’t think the Peking Duck handled the steam cooking very well.  The filling had a good roasted Peking Duck flavor but the duck skin had lost its crispiness and was soft and soggy from the steaming.  As I said these buns were large and I ended up taking two home.  I found that they pan fry well and can be turned into serviceable Sheng Jian.

Shangdong Dumplings – The Jiao Zhi style dumplings come either steamed or pan-fried and the steamed Shangdong variety were the best of the dumplings I tried on this outing. The shrimp and pork mixed filling had big chunks of juicy, fresh tasting shrimp that popped as I chewed which was balanced by savory, fatty smoothness of the pork.  The wrappers were a little thicker and chewier than I usually like but the dough was sweet.

The Dipping Sauces: The Xiao Long Bao came with the traditional black vinegar dipping sauce with slivered ginger.  I don’t usually like this sauce, but the vinegar at Canteen 82 was milder than is usually served with this style of dumplings, so I enjoyed it.  The Peking Duck Bao came with a thick Hoisin sauce that seemed like it was squeezed straight from a bottle but worked well with the Bao.  The Shangdong Dumplings came with a sweetened soy and vinegar dipping sauce, which given the sweetness of the shrimp, didn’t really add any taste dimensions to the dumplings.

The Location:  Canteen 82 is on Columbus Avenue between 82nd and 83rd streets on Manhattan’s Upper West Side.