DumplingGo is a new fast-casual chain starting up in NYC with a focus on health conscious food and packing Asian and Western flavor profiles into dumpling wrappers.  They have taken the Chipotle approach to ordering with instructions hanging above the counter that read – 1) select fried or steamed, 2) choose a filling from the list below, and 3) choose a dipping sauce.  Generally I think of the new fast-casual places as providing a slightly better ambiance than a traditional fast food joint and the interior space, tables and seating was nice, but the food came plonked down on styrofoam plates and the dipping sauce comes in a little plastic to-go tub.

The Dumplings:  DumplingGo offers a big selection of dumplings and mixes it up with the flavor profiles.  They offer: Thai Basil Chicken, Mexican Chili Beans Beef, Korean Kimchi Pork, Black Pepper Seafood, Shrimp with Celery and Carrots, Five-Flavor Eggplant, String Beans & Pork, Vegetable Mushroom and Red Bean.  On the day I went they also had a couple of dumpling specials of the day.  The vegetable filled dumplings are vegan. 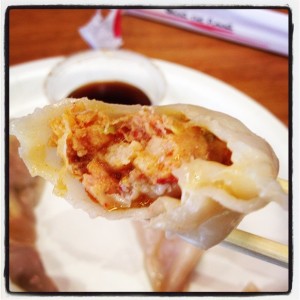 We tried the steamed Vegetable Mushroom dumplings and the Kimchi Pork Dumplings.  The Vegetable and Mushroom ones are stuffed with shiitake mushrooms and bok choy and were fresh and green tasting with a slight earthiness from the mushrooms.  They were really enjoyable.

The typical Korean kimchi dumpling has a high kimchi to pork ratio, often with some glass noodles mixed in, generally the pork is a minor player in the filling supporting the starring role of the kimchi. DumplingGo’s version takes the opposite approach, the filling is a pork meat ball that has been seasoned with a little kimchi. They were good but lacked any serious kimchi punch, clearly they are not targeting customers who are serious about big Korean flavors.

Locations:  DumplingGo has two locations at the moment: West 3rd street between 6th Avenue and Macdougal Street next to NYU and in the East Village Dumpling Alley area on 2nd Avenue between 11th and 12th streets.