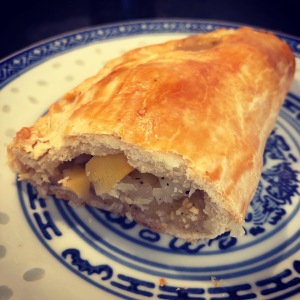 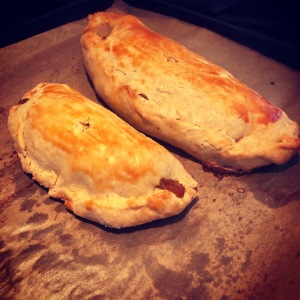 Pasties, the smaller one is filled with Japanese curry glazed vegetables.

I have said it before, (and here) the Cornish Pasty counts as a form of dumpling.  As part of my COVID-19 stay-at-home cooking regime I made a large vegan traditional a Cornish Pasty and two smaller Japanese Vegan Curry Pasties.  For both of the Pasties I followed Spruce Eats recipe, “The Perfect Traditional Cornish Pasty” for the pastry dough using Earth Balance buttery spread rather than actual butter.   To keep it vegan I brushed the Pasties with Just Egg. Following the EU Protected Geographic Indication Specification, for both fillings I used equal parts onion, potato and rutabaga (Swede), all finely chopped.  The filling for the traditional pasty was seasoned with salt and lots of black pepper, and was wrapped uncooked with the pasty dough.

For the Japanese Curry filling, I briefly sauteed two cups of the onion, potato and rutabaga mix and then added 3/4 cup of water and 1 chunk of S&B Golden Curry (1/5 of the Curry package).  My goal was to coat the vegetables in a thick glaze of curry sauce and to avoid having a lot of liquid curry.

I found the dough was pretty challenging to work with and I think that Earth Balance doesn’t bring the same dough making qualities as butter or lard.  So the pasties looked a little mutant, but tasted great and when cooked, the pastry shell was flaky and layered.  The traditional Pasty tasted just how I remember the vegetable Pasty from the famed Ivor Dewdney Pasty shop in Plymouth England.  The Japanese Curry version was everything that I had hoped for, lots of mild curry flavor in flaky pastry pocket.

This entry was posted in Japanese, Pasty, Recipe. Bookmark the permalink.