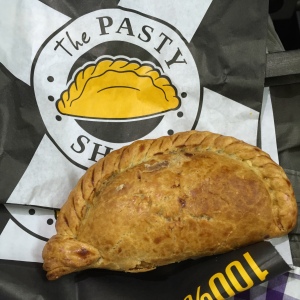 As I have written before, when I travel to London I am in the habit of having a pasty for breakfast at Paddington Station as my first meal in country.  After a recent flight to London, I was distressed to discover that the West Cornwall Pasty shop in Paddington Station has closed.  But thankfully the gentleman at the information booth directed me to The Pasty Shop which has opened near Track 12.  The Pasty Shop sells traditional Cornish Pasties, some not official Cornish, but fairly traditional pasty varieties (steak and ale pasty, vegetable pasty and chicken and vegetable pasty), and some distinctly non-traditional ones, including a pulled-pork pasty and a spicy chili beef pasty.  I went with the vegetable pasty which was filled with potato, peppers, onion, swede (turnip), celery, parsnip and sweet corn.  Given that sweet corn is a new world plant, having corn in the pasty made it very non-traditional.  As a traditionalist I don’t think I approve of the sweetness of corn in my pasty, but overall their veggie pasty was quite good.  The Pasty Shop is transit oriented, the company only has locations at train stations and airports in England. 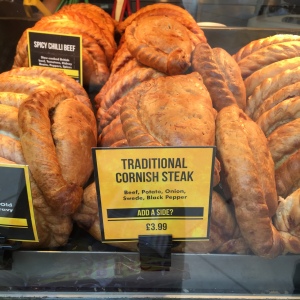 The Cornish Pasty is an EU recognized Protected Geographic Indication and Cornish Pasties can only be sold as such if they are made in Cornwall and meet the EU specification (EU specification is here).   A genuine, EU designated Cornish Pasty may only contain roughly diced or minced beef, potato, swede, onion and spices, must be savory and must be crimped into a D shape.  Apparently, Cornish Pasty makers generate 300 million pounds in trade a year and employ 2000 people.  But with Brexit, the pasty may well lose this designation and market anarchy may be unleashed of inferior “Cornish” Pasties made in Wales, Kent, Yorkshire or even France.  During the Brexit campaign The Cornish Pasty Association came out as anti-Brexit and argued that the UK should stay in the EU.  Or perhaps, without the EU strictures (“vegetable content must not be less than 25% of the whole pasty” and “spices” defined as salt and pepper), there will be an explosion of pasty innovation.

This entry was posted in Pasty, Vegetarian. Bookmark the permalink.