Are Pasties the English Dumplings?

If we begin with the definition that a dumpling is a sealed pocket of dough that encloses a savory or sweet filling, then I think the Pasty counts as the English dumpling. Pasties are baked and a lot larger than your typical Asian dumpling, but as you can see to the left, without a sense of scale, an uncooked Pasty looks a lot like a Chinese dumpling.  Pasties are a sealed pocket of dough wrapped, traditionally, around a filling of diced beef, potato, turnip and onion, seasoned with salt and pepper. I have also seen them made with lamb and mint, all vegetables, chicken and mushroom, steak and Stilton and cheese and onions. 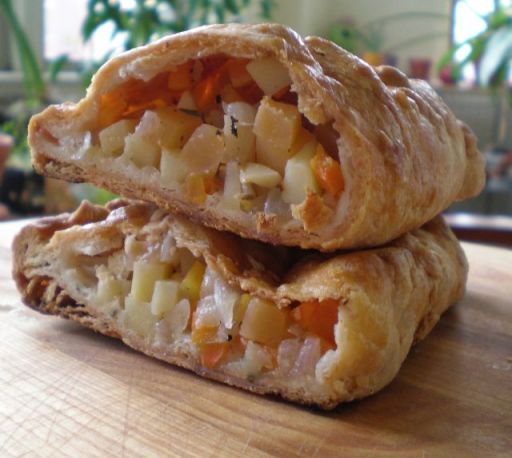 Thought to have originated in Cornwall England, the “Cornish Pasty” has been designated a “Protected Geographic Indication” by the E.U., putting it in the same class of protected

regional foods as Champagne and Prosciutto di Parma.  Thus a Cornish Pasty must be traditionally and at least partially manufactured (prepared, processed or produced) within Cornwall.  The Pasty must also be shaped like a ‘D’ and crimped on one side, not on the top, and the stuffing should include beef, turnip, potato and onion.

When I visit England, I fly into Heathrow, take the airport express train to Paddington station and stop in the West Cornwall Pasty Company for breakfast. The outlet is in Paddington station, to your right as you exit the platform through the gates and enter the station’s main concourse. West Cornwall Pasty Company has 80 locations all over the UK, but claims to hand-make the Pasties in Cornwall using locally sourced ingredients and then to freshly bake the Pasties in the stores.  The company is part of the Cornish Pasty Association, the trade group that pushed for PGI status. Ironically, the pasty in their logo does not appear to be a legitimate Cornish Pasty.

The home of a classic Cornish Pasty is Ivor Dewdney’s in Plymouth, which has been making them since 1930. In addition to the Traditional, they sell a vegetarian and a cheese and onion pasty. These Pasties are really good and perfect for taking out on a hike across the moors.

In the U.S., the Upper Peninsula of Michigan is crowded with stores and cafes selling Pasties, a legacy of Cornish miners immigrating to work in the mines in northern Michigan. The Michigan Pasty trail stretches 193 miles heading East along Route 2 from the Iron Mountain to Highway 75.  In June Calumet, Michigan holds the Pasty Fest.  Similarly, the diaspora of Cornish miners has brought pasties to: Mexican state of Hidalgo, the US towns of Wilkes-Barre, Scranton, Butte and Hazleton, and the Yorke Peninsula in Australia.

You can also get excellent Pasties in New York City at Myers of Keswick, an English grocery store in the West Village that bakes its own Pasties, along with sausage rolls, scotch eggs, Shepard’s pies, lamb pies, and steak and kidney pies. It’s a one stop shop for traditional English food. 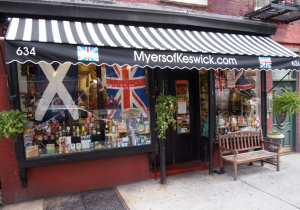 1 Response to Are Pasties the English Dumplings?