Coffee Break is a french pastry coffee shop that suddenly decided to add Chinese food, primarily Shanghainese dishes, to its menu. Coffee Break caught my eye because the new signage advertised Pan Fried Buns (Sheng Jian Bao). The chef is from Shanghai and I guess he spotted that dumpling houses were opening up locally and doing good business with the international students at nearby Columbia University.  So Coffee Break is now a weird mash-up where you can get a croissant, palmier, macaron or napoleon and salted sausage vegetable rice, scallion pan cakes stuffed with beef, sliced beef & tripe in chili oil or omurice. 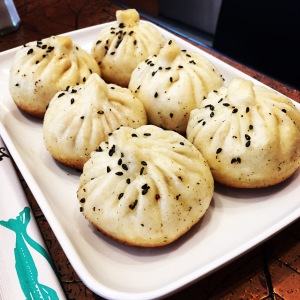 Ever since eating at Yang’s Fried Dumplings in Shanghai (which is when I decided to launch this blog) I have been on a mission to find good Sheng Jian Bao in the U.S.  These buns are the cousin of the soup dumpling, that have slightly thicker dough wrappers that can withstand being fried and then steamed, and like soup dumplings are filled with a pork meat ball and pork aspic soup.  They are usually served with slivered scallions and sesame seeds sprinkled on top.  These buns are hugely popular in Shanghai and are traditionally eaten for breakfast.  The problem with most Sheng Jian Bao in the U.S. is that the bun is too thick and doughly/bready and the bun ends up absorbing all the soup.  The result is a flavorful moist bun wrapper but there is never any soup for slurping. 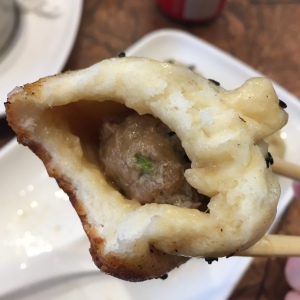 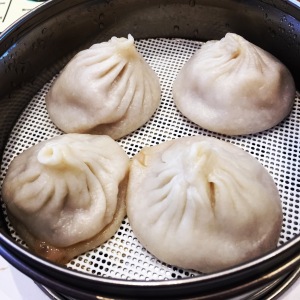 The Sheng Jian Bao at Coffee Break use the U.S. style bready buns but still somehow managed to have lots of soup inside that hadn’t soaked into the bun dough.  The soup was a little salty but a really flavorful fatty pork broth.  One of the reasons I like this style of soup dumpling is that the  pan roasting of the slightly sweet dough creates tasty Maillard reactions and some caramelization on the bottom of the bun that brings extra dimensions of flavor to the dumpling that you don’t get with steamed soup dumplings. I went to Coffee Break twice over a weekend before writing this review and in between my visits they went from six buns per serving to only four per serving.

The Dipping Sauce:  there is a Kikkoman bottle on each table and the soup dumplings come with the typical black vinegar dipping sauce.  But really the soup inside these dumplings is so rich and tasty I don’t think you need dipping sauce.

The Location:  Coffee Break is in the Manhattan Valley neighborhood on Amsterdam Avenue between 105th and 106th streets, just north of the New York City Youth Hostel.