I wanted to love Brooklyn’s Yaso Tangbao but their dumplings did not get me there, they were good but not great.  When it opened back in October 2015 Yaso Tangbao got a lot of good press (see here).   The articles told the shop’s origin story of three high school friends from Shanghai who came to the U.S. for college and then quit jobs in banking and international affairs to open a dumpling shop under the tutelage of Zongxing Tu, the master soup dumpling chef at Joe’s Shanghai in Queens.

Yaso Tangbao inhabits a semi-industrial space with ads from 1920s and ’30s Shanghai hanging from rough finished wood plank walls and the seating is at long wooden communal tables.  Orders are placed at a counter in the back, next to a glassed in dumpling station where cooks wrap pork in hand rolled dough. Once you have ordered and paid you are given a number and you wait for the number to be called to retrieve your order.  Like Vanessa’s, Xi’an Famous Foods and Lava Kitchen, meals at Yaso Tangbao are served on paper plates and bowls on plastic trays. 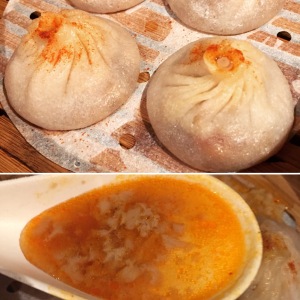 Xiao Long Bao – first off the soup dumplings were perfectly made, the dough was rolled out just thick enough to maintain its integrity and hold in the soup and meat filling. The dumplings also packed in a lot of soup, at least two soup spoons full, however the flavor of the soup and meat was not great.  The spicy pork dumplings had a one note spicy flavor from the chili oil blended into the pork, and the chili completely overwhelmed the pork flavor and any other seasonings blended into the pork.  I was hoping the plain pork dumplings would have a more complex flavor, and there was more flavor going on, but part of it was a slight metallic aftertaste. 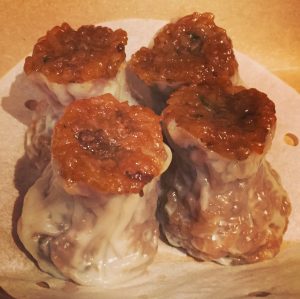 Pork Shu Mai – Shanghai style pork shu mai, which are stuffed with a dirty style rice that has been simmered with pork, are usually one of my favorite dumplings.  The rice in Yaso TangBoa’s Shu Mai was moist and had a great flavor and the dumplings were generously stuffed.  But there was no pieces of pork or sweet and spicy Chinese sausage mixed in with the rice in this version of the dumplings.  I liked the Pork Shu Mai at Kung Fu Steamed Little Buns Ramen much better. 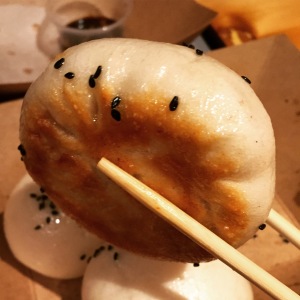 Pan Fried Pork Buns – these buns are called Sheng Jian and are one of the most popular breakfast items in Shanghai.  I love this style of bun and my favorites are from Xiao Yang’s in Shanghai.  The buns I had at Yaso Tangbao were fried golden crispy on the bottom and the pork filling was flavorful but the bun dough was really dense and it seemed like my order had been under cooked.

The Dipping Sauce.  Yaso Tangbao has a sauce making station with a bottle of Sriracha, a couple of bottles of black vinegar and a large water dispenser full of soy sauce.  The plastic dipping sauce bowls provided at the station are tiny and really too small to dunk a dumpling in, I noticed that savvy customers were mixing their sauce in paper boats.

The Location.  Yaso Tangbao is in downtown Brooklyn, on Lawrence Street, just off the Fulton Street Mall.