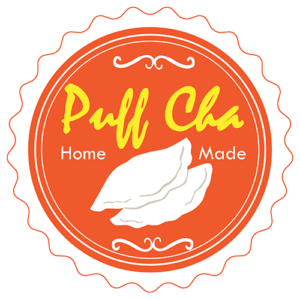 Puff Cha Cafe is a Thai restaurant that focuses on Curry Puffs (Karee Paps in Thai) which the menu describes as “a deep fried delicacy/snack consisting of individual small round pockets of dough that look like a small Cornish pastry (sic), Indian samosa, Portuguese empanada, or Mexican empanada”.  Puff Cha Cafee serves an original style Curry Puff, which are traditionally filled with chicken, taro, onion and curry powder, and a variety of other styles.  They also serve stir fried dishes over rice, ramen soup, dry ramen, soba and bubble tea.

The Dumplings:  In addition to the traditional style filling, Puff Cha Cafe serves: 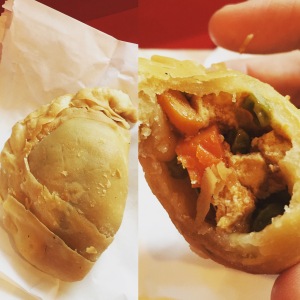 If you buy three Puffs you get free peanut dipping sauce and sweet and sour or spicy cream sauce can be bought for a dollar.  I was in a bit of a rush so I grabbed one Puff to go and  went with the Pad Thai Puff.  The puff filling had a sweetened soy flavor that was enjoyable, but it is not really clear to me how this puff got the Pad Thai moniker, it didn’t have the Tamarind/fish sauce/spicy/peanut flavor I associate with Pad Thai and wasn’t filled with any of the ingredients I think of with Pad Thai.  The green beans turned out to be green peas and the cubed carrot and pea mix looked like they were from a supper market freezer aisle bag.   The fried dough wrapper was excellent, very flaky in texture like a croissant and a pasty shell had a love child – you can see the croissant like outer layer in the photo to the left.

The Dipping Sauce:  I was in a rush and eating as I walked through Hell’s Kitchen so I did not grab any dipping sauce.  Next time.

The Location:  Puff Cha Cafe is in Manhattan’s Hell’s Kitchen, which is home to tons of great restaurants and is the setting for Marvel Comic’s Daredevil series (the Netflix series is awesome).  They are on 50th Street between 9th and 10th Ave.

This entry was posted in New York City, Pasty, Vegetarian. Bookmark the permalink.