My wife has been telling me that products like Piroshkies, Empanadas, Pasties and Samosas do not count as dumplings, but are in fact, hand held pies.  For me a dumpling is a dough pocket that fully encloses a filling and so Piroshkies, Empanadas, Pasties and Samosas seem like they should count as dumplings. She argues that they are too large to be dumplings and further they can’t be dumplings as they are baked; dumplings are steamed, boiled or fried.

However, as a recent NY Times article points out, Empanadas are often fried and most of the Empanadas I see for sale in the Dominican neighborhoods of New York City are deep fried and for that matter a lot of the Samosas I see at Indian restaurants are fried too.  So I don’t think we can rule these products out as dumplings based on the cooking method – cooking method is not the sine qua non for defining a dumpling.  However, the size issue may be relevant, a Calzone meets the definition of a dough pocket that fully encloses a filling, but somehow the Calzone’s size prevents me from thinking of it as a dumpling.  I am not sure what the exact size threshold is for pushing a food out of the dumpling zone, but maybe like Supreme Court Justice Stewart defining porn, I know it when I see it. 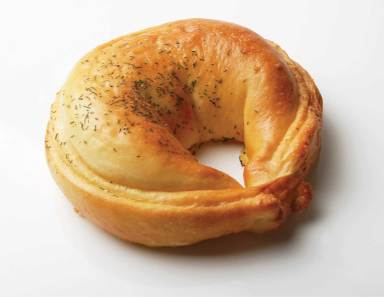 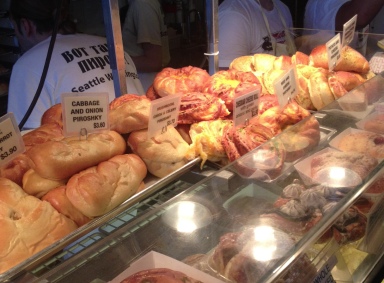 The counter at Piroshky Piroshky

The Piroshky:  There are at least 25 variates of Piroshky available at Piroshky Piroshky and they are all definitely hand-full sized.  The bakery blends traditional Russian recipes and fillings with flavors of the Pacific Northwest – resulting in products like the Smoked Salmon Pate Piroshky.  I tried the Potato and Mushroom one, which I really enjoyed.  The wrapper was golden brown, a little fluffy and bready on the inside and buttery and flaky on the outside.  The mushroom filling really sang with an earthy umami flavor, while the potato provided substance and texture. 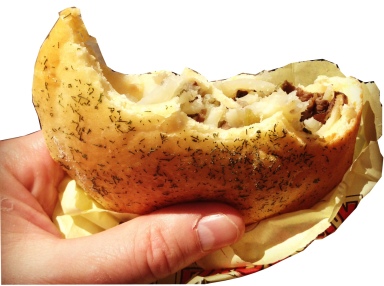 The Location  Piroshky Piroshky is located in Seattle’s Pike Place Market in the downtown area, between Stewart and Virginia, a couple doors down from the “original Starbucks.”

This entry was posted in Piroshky, Seattle, Uncategorized, Vegetarian. Bookmark the permalink.