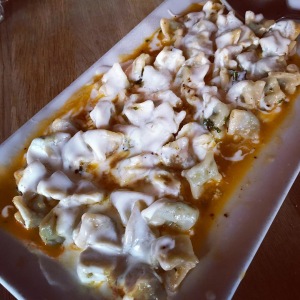 New Brunswick, NJ is home to the great Ska/Reggae/Oi/Punk band The Hub City Stompers, whose recent release “Haters Dozen” is on near continuous play in my home, and the city was also the launching pad for the excellent ska band Bigger Thomas.  Members of HBS and Bigger Thomas have overlapped over the years and make up the core of the new version of Rude Boy George – who do ska covers of 80’s New Wave and Post Punk.

New Brunswick is also home to Efes Mediterranean Grill, which has been a local stalwart since 2001.  Efes has two floors, the first has a counter and seems to be mainly set up for take-out, while the second is a full sit down dining room.  The restaurant, and its sister restaurant in Princeton, NJ, is named for Efes, the ancient classical city in Turkey once ruled by the Greeks and the Romans.

The menu covers most of the bases of Turkish cuisine and includes two types on manti, a type of dumpling popular in most Turkic cuisines, as well as in Central Asian, Afghani, and Chinese Islamic cuisines.  Wikipedia has an extensive discussion on the many forms of manti, their origins and possible links to Korean mandu, Chinese mantou, and Japanese manjū.

The Dumplings: there are two varieties of manti available at Efes, lamb filled and spinach filled.  The spinach filled ones were small and star shaped with a thick, pleasantly chewy dough wrapper.  They were served with a mild garlic yogurt sauce and melted butter seasoned with red pepper.  Because of their small size, each manti contained only a tiny amount of spinach which didn’t provide a lot of flavor.  I also thought the pepper sauce could have been spicier to provide a dynamic interaction with the cooling yogurt sauce.  But, the manti were cooked to al dente perfection with a toothsome texture and chew, and overall I enjoyed the dish.

The Location:  Efes Mediterranean Grill is on the corner of Easton Ave and Somerset Street in downtown New Brunswick.  It is one block from the Amtrak/New Jersey Transit Rail Station.

This entry was posted in manti, Vegetarian. Bookmark the permalink.