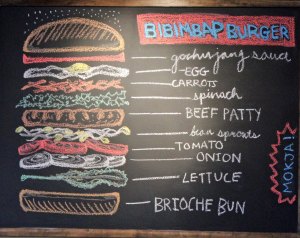 Mokja Korean Cuisine opened recently on the Upper West Side of Manhattan and is a spin-off of Mokja Korean Eatery in Astoria.  Mokja serves traditional Korean dishes and also some mash-up fusion dishes – for instance, the Bulgogi Nachos, which are tortilla chips topped with gochujang aioli, kimchi, beef bulgogi and melted sharp cheddar and the Bibimbap Burger which is a burger topped with bibimbap vegetables, a runny fried egg and bibimbap sauce on a brioche bun.  Mokja has a small main dining room that seats maybe 20 people and also has a party room available that seats 15 people. 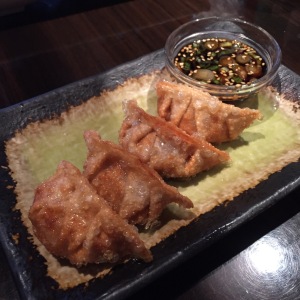 The Dumplings:  Mokja serves homemade pork with vegetable dumplings that come either fried or steamed and in orders of four or nine pieces. I tried the fried dumplings which are deep fried cooked and are crispy and crunchy on the outside.  I liked these dumplings a lot; inside the wrapper the pork is densely packed into a tight meatball that is savory and juicy.  This is not a bland factory made frozen dumpling, the filling has a robust, well seasoned pork flavor.

The Dipping Sauce: Mandoo dipping sauces in Korea tend to be loaded with scallion slivers and sesame seeds, and often ginger and/or garlic too.  Sometimes the sauces are so dense with pieces they are like a slurry (see the sauce at Myeongdong Gyoza here) and this is the route Mokja has gone with adding scallion and sesame seeds to their sauce.  I like this approach because there was enough scallion to add aromatic and pepper notes and the sesame seeds added a hint of smokey flavor and crunch to the dumpling.  The sauce itself appeared to be a mix of soy, sesame and rice vinegar.  Mokja’s strong work with the dipping sauce really elevated their dumplings.

The Location:  Mokja is on Amsterdam Ave between 101st and 102nd streets which is the southern end of Manhattan’s Manhattan Valley neighborhood.   This might be the Northern most Korean restaurant in Manhattan.

This entry was posted in Mandoo, Pork. Bookmark the permalink.