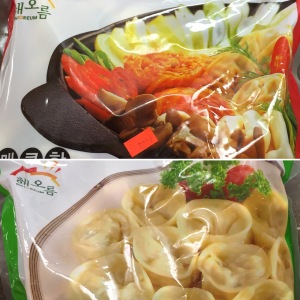 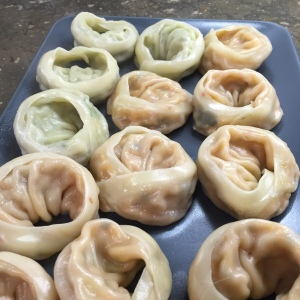 Haioreum appears to be the house brand of the H Mart chain of Asian grocery stores.  H Marts are known for giving out lots of free samples on weekends and my local one is my favorite place to grocery shop.  The chain began in 1982 in Woodside, Queens, New York City as a small corner grocery store and now has over 40 locations.  H Mart stands for Han Ah Reum, which means “One Arm Full of Groceries”.

The last time I was in H Mart I grabbed a bag of Haioreum vegetable mandoo and a bag of Haioreum kimchi mandoo, both of which are vegan.  Both styles were solid, good dumplings, although they didn’t really distinguish themselves from other frozen mandoo I have tried. Of the two, I liked the vegetable ones the best.

The kimchi ones are filled with standard napa cabbage kimchi, noodles, tofu and dried radish and were pretty mild and not particularly spicy. These are kimchi dumplings for people who haven’t yet developed a taste for kimchi.  The vegetable ones were the better of the two styles and are filled with dried radish, noodles, tofu, cabbage, green onion, leeks, onion, garlic, sesame and ginger. The vegetable mandoo tasted of sweet onions and leeks mixed with a mild cabbage flavor, they were quite good.