I have given the Asian-fusion, vegan cafe, Franchia, a full review previously, but the Spicy Steamed Wontons that they recently added to their menu caught my eye and I had to stop by and try them.  I am a big fan of wontons in in spicy sesame oil, a dish that is often on the menu at Szechuan style restaurants.  Franchia’s menu describes their new dish as “Thin wonton skin stuffed with veggie ‘chicken’, tofu and vegetables topped with spicy sauce”, so I went into dinner hoping these would be a vegan version of wontons in spicy sesame oil. 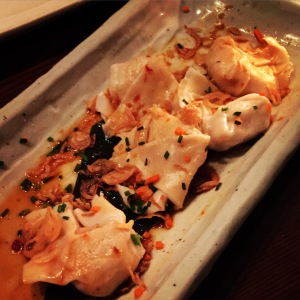 As you can see in the photo these weren’t quite the classic wontons served in a bowl of spicy sesame oil.  Instead the wontons were sauced with a spiced soy sauce with flecks of scallion greens and carrots and flakes of crispy fried onions.  Overall the dish was good, but the wonton wrappers were a little thick and chewy and the stuffing did not have a particularly marked chicken flavor.  The sauce was pretty tasty, but the best part of the dish was the crispy fried onion flakes.

As a side note, we also ordered the Tofu and Vegetables Claypot in Spicy Ginger Sauce, which didn’t actually come cooked in a claypot, but was served in a Bibimbap stone bowl, and also didn’t come with any tofu.  After we inquired with the waiter about the tofu, he brought us some raw tofu to add to the bowl – so nowhere really close at all, to a simmered claypot meal.

This entry was posted in Vegan, Vegetarian, Wontons. Bookmark the permalink.