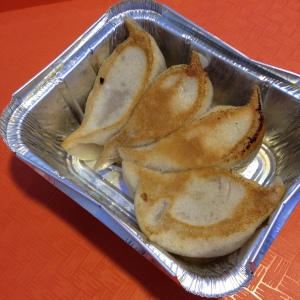 New York City’s East Village is quickly developing a Dumpling Row of innovative, sometimes quirky, and often tasty dumpling joints. While geographically in Dumpling Row Hibachi Dumpling is light years away from having these qualities.

The Dumplings: for a place called Hibachi Dumpling this spot has a surprisingly limited menu of dumplings, you can have pan fried pork and chive dumplings or no dumplings. Immediately upon ordering, my dumplings to-stay were unceremoniously plopped down on a tray in an aluminum to-go container. These dumplings had been pan fried at some point in the past but had sat in their container until loop warm and limp. Instead of crispy and golden the dough wrappers were grey and spongy. These dumplings were nasty and even at $1.99 for four dumplings they are not worth eating.

The Dipping Sauce: on the counters there were squirt bottles of mystery brown sauce and red sauce and a bottle or two of sriracha. The bottle of brown sauce leaked and drooled sauce on my hand and the counter. Like the dumplings, the sauce was bad.

The Location: Hibachi Dumplings is one 1st ave and, ugh forget it, you don’t want to go.