Its been a long while since I’ve been to Grand Sichuan International in Chelsea and I remember it being a lot better back in the day than it was last week.  One of the things I remember liking about the Grand Sichuan was that its menu had a “Traditional Chinese” section organized by region that had lots of really interesting dishes and also a section labelled “Mao’s Home Cooking”.   But food quality and service seems to have gone down hill in the years since I was there last.

The Dumplings:   The menu has a pretty wide selection of dumplings, but for this outing I tried the wontons in red oil and the crab and pork soup dumplings.

Wontons in red oil – These pork filled wontons are typically boiled and served in a hot red chili oil, sometimes with some peanut butter mixed into the oil.  The ones at Grand Sichuan were served in what appeared to be just red chili oil, which didn’t really impart any flavor other than heat.  These wontons pretty much had a one note flavor.

Crab and Pork Soup Dumplings – I returned to the Grand Sichuan because I had good memories of the soup dumplings, but this time I was pretty disappointed.  The wrappers were relatively thick and rubbery and not delicate at all, the soup was thin like a consomme rather than being a rich, thick broth, and the dumpling filling lacked any discernible crab related texture or flavor. 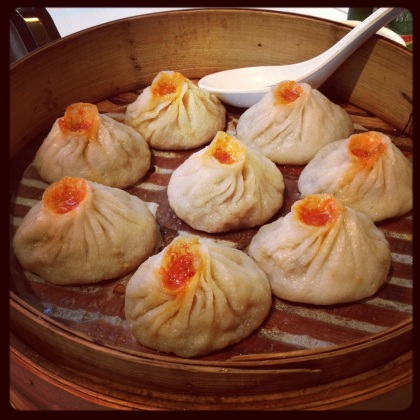 The Dipping Sauce:  Usually I don’t like the dipping sauce that traditionally accompanies soup dumplings but this was best part of the dumpling experience.  The ginger was more thinly and delicately slivered than I’ve seen in any other soup dumpling dipping sauce, and the black vinegar was mild and slightly sweet and was actually infused with ginger flavor.

The Location:  There are several Grand Sichuan International outposts in Manhattan, this one is on 9th avenue between 24th and 25th streets.  Oddly enough the awning and the signage all say Chelsea Chinese, but the articles and the photos in the window refer to it as the Grand Sichuan.