The South Korean film Oldboy is one of my favorite movies and I have some misgivings about the Hollywood remake, you should all see the original.  But as dumplings play a key plot point in the film and the PR campaign for the new release involves eating dumplings, I feel obliged to report the following,

“For a chance to win the actual hammer used by Josh Brolin’s character in the film, tweet @FilmDistrict a photo of a dumpling at your favorite local dumpling spot with the hashtag #eattheclues. The contest ends on October 20th and a randomly chosen winner will be selected the following day on October 21st.”

Some back ground on Oldboy…. After a night of drinking businessman Oh Dae-su (played by the amazing Choi Min-sik) is kidnapped and held in a privately run prison for 15 years.  He is then just as mysteriously released, given a sharp looking suit and a cell phone; the first call he receives on the phone tells him that he has five days to discover why he was held captive or his daughter will be killed.  Throughout his captivity Oh Dae-su was fed Chinese dumplings delivered from the same restaurant each day, so he goes on a dumpling hunting mission to track down that restaurant and follow the delivery guy back to the prison. You don’t want to know about the hammer. 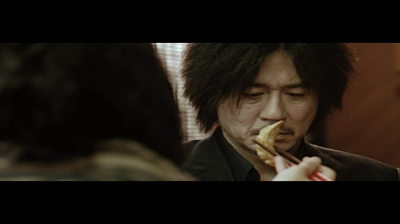 This entry was posted in Chinese, Korea, News. Bookmark the permalink.