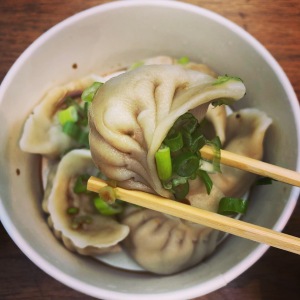 Seven years ago today, Dumpling Hunter launched with a review of Shanghai’s Nan Xiang Xiolong Mantou, a meal that was inspired by the much missed Anthony Bourdain and his trip there on the Shanghai episode of No Reservations.  Since then there have been another 394 posts and over 65,000 visitors.  The top restaurants this year were:

Dumpling Shack in the Kitchen section of London’s Old Spitalfields Market.  Their Sheng Jian Bao get all the press and media attention, but the Boiled Vegan Dumplings in Soy Garlic Dressing should not be overlooked.

Tipsy Shanghai, near New York University, made the list for its Sheng Jian Bao and Wonton soup.

Excellent Dumpling House has been around for 37+ years, first in Chinatown and now on 23rd street, and made the list for its Pork Xiao Long Bao and Hot and Spicy Wontons.

The lowlight for the year was Bodhi Kosher Vegetarian Restaurant, which is somehow getting reviews on par with Vegetarian Dim Sum Restaurant, but is nowhere near as good, and was frankly bad.

This entry was posted in Uncategorized. Bookmark the permalink.