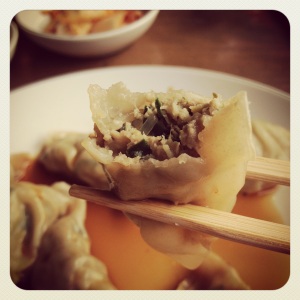 The Mill Korean Restaurant is an ex-diner turned Korean restaurant near Columbia University.  The Mill (ne Mill Luncheonette) was originally a greasy spoon diner with an Orthodox Jewish owner that in the early 90s began a slow-motion metamorphosis into a traditional Korean restaurant.  I remember when the Mill was 95% U.S. diner food with a few Korean dishes on the menu prepared by a recently hired Korean sous chef.  Now the last vestige of the that diner heritage is the Lime Ricky listed in the drinks section.

The Dumplings:  The Mill serves fried or steamed meat and vegetable and vegetable dumplings.  The steamed meat dumplings are stuffed with pork, tofu, glass noodles and scallions and come pre-doused with sauce.  The dumplings were meaty and tasty, but I found there was a slight bitter aftertaste which I think was contributed by the sauce rather than the dumpling filling. 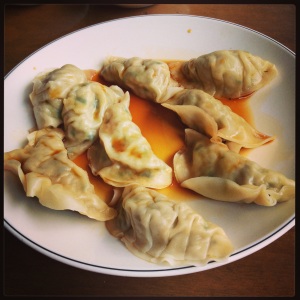 The Dipping Sauce:  The dumplings come bathed in a sauce that seemed to be comprised of soy, rice vinegar and red chili paste.  I couldn’t quite discern where the bitterness was coming from, but it was there in the sauce.

The Location:  The Mill in on Broadway between 113th and 114th street across the street from Columbia University.

This entry was posted in Mandoo, New York City, Vegetarian. Bookmark the permalink.