London’s Chinatown, which is mainly comprised of restaurants, two or three grocery stores and a few bakeries, is located just North of Leicester Square and next to Soho, and covers a 4 or 5 square block area. There are quite a few dumpling houses in Chinatown, and based on prior experiences and online reviews I tried three of them; Leoung’s Legends Continue, Beijing Dumplings and Jen’s Cafe – all within a five minute walk of each other. Each of these places feature open kitchens/dumpling making stations in the front windows where you can watch the chefs rolling out wrappers and stuffing dumplings. 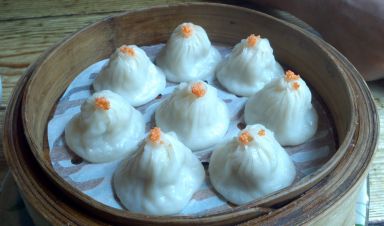 Leoung’s Legends Continue is a dim sum restaurant and the sister restaurant to Leoung’s Legends, and was the best of the three places we tried. Leoung’s has a pretty wide array of dumpling and dim sum and because I wanted to hit three places in one afternoon, we confined ourselves to the Crab Soup Dumplings and the Beijing Dumplings. The Soup Dumplings were great, there was a lot of soup with a deep, rich crab broth flavor and the crab meat imparted a sweetness to the pork filling. The Beijing dumplings were a traditional pork and chive filled dumpling that had been boiled. The dough wrapper was relatively thin and had a mild sweetness, while the filling had a robust, savory pork flavor with the chives imparting a slight pepper flavor. I have tried a lot of the other menu items at Leoung’s during prior trips and have enjoyed everything I have tried.

Beijing Dumplings. The first problem with Beijing Dumpling was the smell – malingering just behind the usual restaurant cooking smells there was a distinct smell of bleach and cleaning products in the air. The smell was reassuring in the sense you knew something had been cleaned aggressively, but scary to wonder what exactly needed to be cleaned with so much chemical aggression; it reminded me of the smell in strip clubs on Bourbon Street in New Orleans. The second problem with Beijing Dumplings was the dumplings. Instead of being small pouches filled with a meat ball floating in a bath of delicious scalding broth, the soup dumplings had a shriveled appearance and the wrappers were sort of shrink wrapped around the dumpling filling. I think the dumplings had been sitting in the steamer for a long time and basically these soup dumplings were soup-less. The other issue was that we got an order of the Spicy Pork Soup Dumplings and an order of the Shrimp and Pork Soup Dumplings but when they arrived we struggled to tell them apart. The dumplings came with Sambal style chili oil and with black vinegar dipping sauce.

Jen’s Cafe is a small triangular cafe at the south end of Newport Place and sells noodle soup, dumplings and boba tea. It is a tiny spot with maybe six tables and a small counter that seats four people. Here we got an order of Beijing dumplings, which were a boiled pork and chive dumpling, and an order of fried dumplings, which were essentially pan fried versions of the Beijing dumplings. Both dumplings tasted quite good with a solid savory pork flavor, although the Beijing dumplings were not quite as good as the ones at Leoung’s Legends Continue. The fried dumplings were nicely crisped on the bottom without being oily. The counter and tables were stocked with bottles of soy, white and black vinegar, and hot oil so you can build your own dipping sauces.

The Location: All three of these restaurants are within a five minute walk of each other in London’s Chinatown.