Neptune is a small Polish dinner in New York City’s East Village neighborhood and is contributing writer, El Diablo’s, go-to spot for pierogies. I can understand his devotion to Neptune, the restaurant won best potato pierogi in the recent 2013 New York Best Pierogi Contest.  Neptune also has a full menu of Polish dishes including a tasty stuffed cabbage and kielbasa.  Unfortunately the potato pancakes were a miss, they tasted burnt and were really heavy. 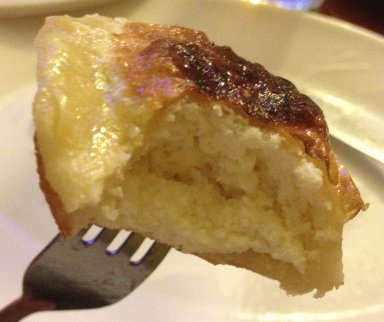 The Dumplings: The menu at Neptune includes meat (which is a mix of beef and chicken), cheese, potato and spinach pierogies that come either boiled or boiled and then fried (technically boiled and then fried pierogi are called varenyky).  The dough wrappers at Neptune are thin and delicate and when fried are crispy and golden.  The cheese pierogies are filled with a sweet cheese similar to a cheese blintz filling, but the fried dough wrapper is not really savory enough to create the desired savory, salty and sweet combination. So I found the cheese ones were a little too much like desert. The spinach pierogies are filled with creamed spinach, which was OK, but the filling tasted a little like frozen cream spinach from the supermarket.  The potato pierogies however, were excellent and it was easy to see why Neptune took the prize for this variety. The potato filling was creamy but also light at the same time, not the gut busting heavy nuggets that often pass as potato pierogies. One disappointment all around was that none of pierogies came topped with caramelized onions. 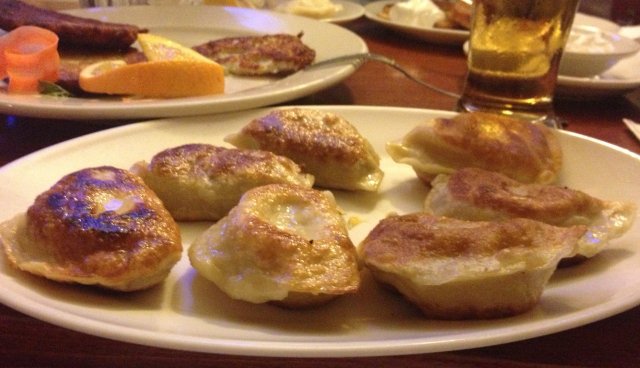 The Dipping Sauce:  As with most pierogi spots Neptune serves a bowl of sour cream with their pierogies.

The Location: Neptune is on first avenue between 12th and 13th streets in the East Village neighborhood of New York City.

This entry was posted in New York City, Pierogi. Bookmark the permalink.