After my Chinese colleagues told me that Nan Xiang Xiaolong Mantou was for tourists I asked them where they went for dumplings and they took me to Xiao Yang’s (Yang’s Fried Dumplings).  I’ve been to three of the locations, which were all small, mainly to-go joints with a few counter seats, that lacked the ambiance of Nan Xiang, but the dumplings were fabulous.  Yang’s serves sheng jian which, similar to soup dumplings, have a hot broth inside the dumpling wrapper.  They also serve a soup, with or without dumplings, but I didn’t get around to trying the soup. 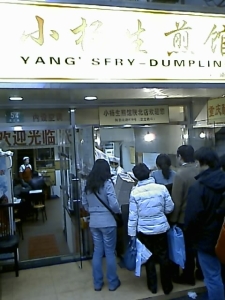 The Dumplings: Sheng jian are spherical dumplings that are cooked on large round, covered pans and are fried and crispy on the bottom and steamed on top. The outside of the dumplings are sprinkled with sesame seeds and green onion, inside there is a seasoned ball of pork and a rich broth.  If you get them to-go, squirt some dipping sauce into the to-go container and inevitably some of the dumpling broth will pool into the container as well, by the time you are finished eating the dumplings there will be a tasty soup in the container. 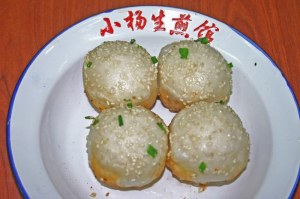 The Dipping Sauce.  I have read that traditionally sheng jian are eaten with a vinegar dipping sauce, but Yang’s provides squeeze bottles of a soy-vinegar mixture.

Location:  There are reportedly about 12 locations in Shanghai, three of them are along Nanjing road, which if you are visiting Shanghai, you are bound to end up walking along.  One location is in the back of the Shanghai #1 Food Market (720 Nanjing Road), which is a really interesting food market.  The Food Market is just east of People’s Square.  The other two spots are west of People’s Square on Wujiang Road, which runs parallel to Nanjing Road, just south of Nanjing Road (54-60 Wujiang Road and 269 Wujiang Road).