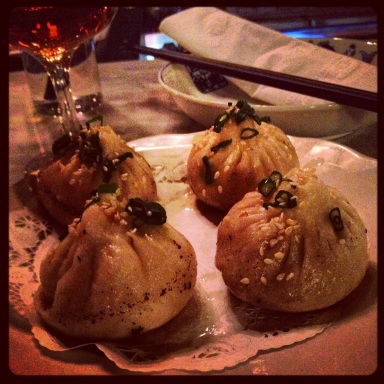 Sheng Jian – like China Cafe, it is a little dark at China Blue for my IPhone camera

China Blue is the new three-week-old venture from the owner of the Michelin starred Cafe China (I just re-read my review of China Cafe which was a little harsh, I must have been cranky when I wrote it, I have been there a bunch of times and love the food).   While Cafe China celebrates Szechuan cuisine China Blue focuses on the more subtle flavors of Shanghai.  The restaurant is located far West on Watts Street in Tribeca, practically in the Hudson, which means to walk there you need to deal with Holland Tunnel entry and exit ramps and traffic.  It is a bit of a mission to get there but it is a mission you should accept.

The Dumplings.  The dim sum menu has a wide selection of dumplings to choose from, so for this outing I focused on the pork ones – steamed pork dumplings, pork soup dumplings (Xiao Long Bao) and the pan fried pork buns (Sheng Jian).

Pan Fried Pork Buns – of all the Sheng Jian I have had in the U.S. these were the closest to the ones I fell in love with in Shanghai (at Xiao Yang’s).  Sheng Jian should be made with pork aspic and so should be so juicy they are almost soup dumplings, the Sheng Jian served in the U.S. are usually dry and lack the soup.  The ones at China Blue were filled with a pork meat ball bathed in a rich velvety, pork soup and were delicious. They were so good I ended up getting two orders, but like a rookie I managed to scald my tongue on the first dumpling of the second order.  You have to respect these dumplings the same way you do Xiao Long Bao, sip the soup from the dumpling cautiously.

Pork Soup Dumplings – the wrappers on the soup dumplings were thin and delicate, just containing the soup while maintaining their integrity – a perfect balance that is really hard to find in the U.S.  I found the soup though, to be a little over salted.  I suspect that after coming off their Szechuan restaurant the chefs may be afraid the New York palate is yet not ready for the more subtle flavors of Shanghainese food.  Overall they serve a very strong Xao Long Bao.

Steamed Pork Dumplings – this was another delicious bamboo steamer of dumplings.  They had robust savory pork flavor and were super juicy.  These are a simple dumpling, without the molecular gastronomy transformation of pork aspic into soup as in the Xiao Long Bao or the Sheng Jian, but were filling and warming on a freezing cold night.

The Dipping Sauce.  The Xiao Long Bao come with the traditional black wine vinegar sauce with slivered ginger, a sauce I am still working on liking, but that is just me.  The version at China Blue is a little milder than I have had elsewhere. The sauce that came with the steamed dumplings and the pan fried buns appeared to be the same vinegar, without the ginger, with maybe some sesame oil added, a little disappointing.

Location.  As I mentioned above, Watts Street is a little difficult to get to – the nearby Holland Tunnel creates weird traffic patterns that are not pedestrian friendly.  The easiest route is to take and navigate the traffic is to take the A train to the Canal Street stop and use the second most northern exit off the platform up to the street (for a train heading down town these are the exits at the back of the train).  This exit puts you on 6th Avenue just below Canal Street. Walk north on 6th and then turn left onto Canal, walking along the south side of Canal.   Walk west on Canal until you hit Watts and then China Blue is midway between Greenwich and Washington Streets.

This entry was posted in Uncategorized. Bookmark the permalink.