I have finally found success in my quest to create dim-sum style fluffy steamed buns.  The guys behind the counter at Tran’s World Market clued me in that their mother uses Vinh Thuan’s Bot Banh Bao Dumpling Flour to make her show stopping pork buns.  This flower is definitely the secret weapon, it makes beautifully fluffy steamed bao.

I filled the bao with an Impossible Meat based version of the Korean Burger in Robin Ha’s “Cook Korean: A comic book with recipes“.   This is a really good cookbook that I enjoyed reading as a manga and I have made a bunch of the recipes, which all out great.  For the bao filling I made golf-ball sized “meat” balls that I pan fried, let cool and then wrapped in dough made from Bot Banh Bao flour.  For the dough I just followed the recipe and bao making instructions on the back of the package.  Here is the recipe that I adapted from Robin Ha. 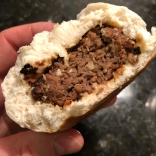 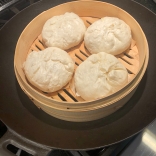 Very finely chop the onion and garlic.  Mix all of the ingredients in a bowl and then form 4-5 meat balls.  Pan fry the meat balls so they are browned on the outside and just cooked through.  Let the meat balls cool to room temperature.  Follow the instructions on the Bot Banh Bao flour to make the dough and make the bao stuffed with the meat ball.  Place three bao in a regular bamboo steamer that fits in a wok.  When these bao steam they will plump up a lot and nearly double in size.

The bao can be refrigerated or frozen and then heated up in a micro-wave.  They are even better when you additionally pan fry the bottom of the buns.