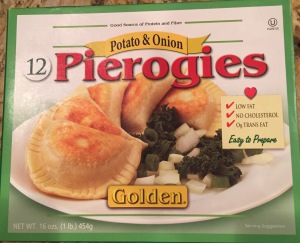 Golden Brand Frozen Pierogies are made by Old Fashioned Kitchen, Inc. which began in 1951 as a storefront business in Brooklyn making fresh blintzes for local bakeries and distributors.  These first blintzes were made on an eight-burner stove salvaged intact from the kitchens of a local hotel that was being demolished.  Today they make Blintzes, Potato Pancakes, Pierogies, and Dessert Crepes. All of their products are made under the supervision of the Union of Orthodox Jewish Congregation of America.  Their pierogi line-up includes; spinach and potato, potato and onion, potato and cheddar, and spinach, broccoli and cheddar.

I tried their potato and onion pierogies which were pretty good, but I thought the dough wrapper a little too thick and chewier than I like.  The potato filling was a light brown color, like mash-potatoes made with their skin, and had a sweet onion taste.  They are better if you pan-fry them after boiling them, rather than eating them just boiled.  The potato and onion pierogies are vegan.

This entry was posted in Boiled, Frozen Dumpling Review, Pierogi. Bookmark the permalink.