One of the surprises about the college towns in Western Massachusetts is that, with a few notable exceptions (Bela, Oriental Flavor, Pizza Amore) the vegetarian and vegan dining options are often so weak: bad hippy food, bad Asian food or bad food.  Thankfully the relatively new Vegan Palate in Northampton is providing some excellent new options.  The hot and sour soup, spring roll and Singapore Chow Mai Fun were all great and Vegan Palate is getting a lot of love in Yelp! reviews, so I am excited to go back and try some more dishes.

The menu at Vegan Palate appears to be largely inspired, or is perhaps a direct copy, of LuAnne’s Wild Ginger in New York City (reviewed here and here).   Did a chef from LuAnne’s move to Western MA and set up shop using the same menu?  Or was there some other third party restaurant that originated this menu and both LuAnne’s and Vegan Palate copied it?  I guess I don’t care how the menu and recipes got to Northampton, I am happy they are here because I really like the food.

Pan Fried Vegetable Dumplings – to paraphrase my review of LuAnne’s – The bright green vegetable dumpling seem to be the same frozen vegetable gyoza I’ve eaten at several Japanese restaurants (see Moshi Moshi) and are fairly bland but serviceable, definitely better pan-fried than steamed.  The pan fried version at Vegan Palate were limp, I think they had been micro-waved and then insufficiently pan fried.  Moshi Moshi’s pan fried preparation of this frozen dumpling is better. 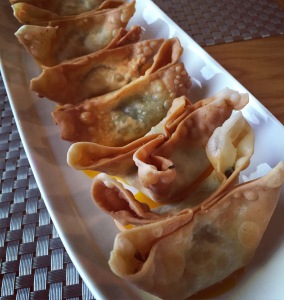 Watercress and soy cheese fried wontons – I had some reservations about ordering these at LuAnne’s but ended up really liking them, to quote myself – “While I admit that these dumplings sounded gross to me and I had to be convinced to order them by my dining companion, they turned out to be really good; better than their vegetable dumplings or the shumai. The filling was mainly comprised of spinach and I didn’t notice any peppery watercress flavor, but the spinach mixed with the creamy, American cheese style, soy cheese was really tasty.  The wontons were perfectly deep fried and crispy and crunchy without any oiliness.”

Flavor-wise the wontons at Vegan Palate are really similar to the  ones at LuAnne’s, but are folded differently from those at LuAnne’s.  So maybe my original supposition that these are a frozen brand of dumpling is incorrect and they are in fact house made at each restaurant.   A thought that struck me while eating them this time was that “wonton’s filled with vegan saag paneer” would be a better description for this dumpling.

The Dipping Sauces:  In my review of LuAnne’s I was quite critical of the mango dipping sauce served with the Watercress and soy cheese wontons and of the soy dipping sauce served with the vegetable dumplings.  For both dishes I though the dipping sauce was too sweet.   The versions of these sauces served at Vegan Palate cut back on the sweetness and the sauces were more enjoyable for the change in the recipe – maybe someone read my earlier review?  Rather than serving the mango sauce in a dipping bowl, the wontons at Vegan Palate are served on top of a smear of mango sauce.

The Location:  Vegan Palate is at 261 King Street in Northampton, MA and is behind the Sakura Asian Buffet restaurant.