With 2015 coming to an end it is time look back at the best and worst dumplings of the year.

Best Overall Dumpling:  The winner for the year is Nishida Sho Ten‘s pork gyoza which are served fried into a thin layer of crispy, crunchy batter.  This spot also has excellent Takoyaki and some of the best onigiri I’ve sampled so far.  Nishida Sho Ten‘s location in mid-town far east, near the UN, makes it a pain to get to, but totally work the trip.

Best Vegan Dumpling:  Peacefood wins for vegan dumpling.  It is unclear why the menu lists them as “Shanghai Dumplings”, they resemble none of the styles of dumplings found in Shanghai, but they are really, really good.  Peacefood has a weak burger and terrible service; the staff mainly hang out and ignore the customers.  Its difficult to place an order at Peacefood, but if you can get the staff’s attention order the dumplings.

Best Vegetarian Dumpling:  Xi’an Famous Food‘s vegetarian dumplings were just edged out for Best Overall for 2015 by Nishida, but they easily win Best Vegetarian.  Their dumplings are packed with spinach, probably an entire day’s worth of vegetables are in each order, and the spicy and sour sauce they are doused in is amazing.

Best Wontons:  The wontons in hot chili oil at Dumplings and Things were excellent. They take an unconventional approach to the wonton wrapper, but their wrapping style makes it easier to sop up their deeply flavored sauce. 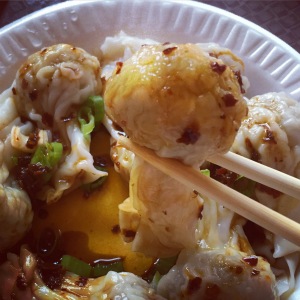 Worst of the Year:  Chopsticks on Grace Bay in Turks and Caicos sells some deeply bad dumplings.  I have seen better looking dumplings at airport terminal food courts in the Mid-West.