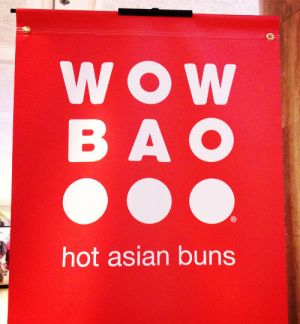 Based on its signage alone I had really wanted to like Wow Bao, but it really wasn’t that great, just basically meh.  Wow Bao is a local Chicago Asian fast food chain with four locations and a food truck, and a location in Baltimore at Oriole Park.  They sell, well of course, Bao, which are Chinese steamed buns, and pot stickers. For Bao you have the choice of teriyaki chicken, spicy kung pao chicken, whole wheat with edamame (these are vegan), thai curry chicken, spicy mongolian beef, BBQ pork, coconut custard and chocolate.  The pot stickers come stuffed with green vegetable (egg is used in the wrapper so these are only vegetarian) or pork and cabbage. Below is the promotional video for Wow Bao.

The Dumplings:  I tried the BBQ Pork and the Edamame Bao and the Pork and Cabbage pot stickers.  The Bao are about 3 inches in diameter, so a bit smaller than the Bao I typically get in Chinese restaurants in NYC. 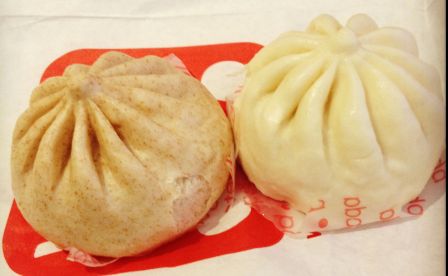 The Whole Wheat and Edamame and the BBQ Pork Bao

Whole Wheat Edamame Bao – These Bao were stuffed with whole and mashed edamame, cabbage, shittake mushrooms, crushed peanuts and red bell peppers.  I love edamame so I was pretty excited to try this, but unfortunately the flavor of the one I had was marred by a sulfurous, over-cooked cabbage taste.

BBQ Pork Bao – This bun was packed with a generous amount of BBQ Pork, which was fairly sweet and with just a hint of spiciness to it. A solid effort. 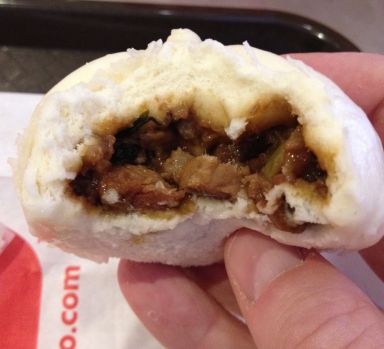 Pork and Cabbage Pot Sticker – The pot stickers are served piled in a Chinese to-go style box container heaped with chopped scallions. Unlike the gyoza I had recently at Sun Chan, these were nicely, crispy-fried on the bottom, with a pleasing crunch. Unfortunately, they tasted mostly of salt and grease, with no real discernible pork flavor.

The Dipping Sauces.  The Pot Stickers come with either sesame-mustard or a soy-ginger dipping sauce.  The sesame-mustard sauce was a complete disappointment, a bright yellow creamy sauce with the tiniest whiff of mustard flavor.  The soy-ginger sauce had pieces of ginger in it but no real ginger flavor.

The Location.  There are four locations in Chicago and a food truck which you can follow on Twitter at #bunsontherun. I hit the Water Tower Place location which is inside the main entrance of Water Tower Place on Michigan Avenue at East Chestnut Street.  However, this location does not sell Pot Stickers so I walked over to their other nearby location at 225 N. Michigan Ave.

This entry was posted in Buns, Gyoza, Vegan, Vegetarian. Bookmark the permalink.